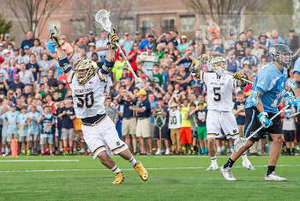 ND was truly abuzz on Friday as students scrambled to enjoy the (somewhat) warm April weather. With a jam-packed line-up of events set for the weekend ahead, everyone seemed well informed on the variety of opportunities to enjoy the weekend before retiring to Club Hes for the finals push. Though most students were excited about AnTostal and the Fisher Regatta, one important event was going down Friday night that very few students seemed interested in: the ACC men’s lacrosse tournament.

Friday night’s contest with arch-nemesis Duke proved to be the least interesting game of the year for the Irish, resulting in a 13-8 loss. Despite this disappointment, the ACC semifinal could wind up being a turning point as the season concludes, yet relatively few will realize it.

The lacrosse team currently holds the honor of being ranked number one, yet many at the university have no clue that it is the reason why the “#1” sign atop Grace Hall is lit up. Despite Notre Dame’s consistent success and the lacrosse team’s growth, few students pay attention to how the team performs over the course of the season. This year is one worth investing in.

The relative lack of interest in the lacrosse program is nothing new. Students will pay attention if the Irish make it to the Final Four on Memorial Day and will celebrate if they win, but a small number are deeply interest in the sport. Realistically, lacrosse will not drum up as much attention as football or basketball; however, it is disappointing when the outstanding achievements of our athletic program are taken for granted.

It is hard to stay up to date on every Notre Dame sport, but this year’s lacrosse season is one worth attention. On opening day this year, the Irish posted a 14-12 win over Big East power Georgetown. Even more impressive was the performance of freshman Mikey Wynne, who netted 6 goals in his debut. Wynne has only improved this season, leading the talented team in goals and averaging a .534 shooting percentage. In Notre Dame’s impressive 15-14 win over UNC, Wynne scored three goals in 66 seconds, an unbelievable feat. Wynne’s consistent performance is only one of the magical moments that have characterized the 2015 men’s lacrosse season.

Notre Dame lacrosse tends to play extraordinarily well at home, and this season was no exception. Regardless, few expected the Irish to maintain a perfect home record considering they are facing Ohio State, Syracuse, and North Carolina in Arlotta Stadium. Even so, the Irish were able to shut out the number 10 ranked Buckeyes on March 21st in an unbelievable display of defense against a very efficient offense that averaged over ten goals a game in all other contests excluding the ND game. The Ohio State offense is the same offense that barraged Denver’s highly touted defense with 13 goals. Needless to say, shutting out OSU is a monumental feat for the Irish.

Notre Dame lacrosse has continuously found a way to win when they need to. The week after the Ohio State shutout, the Irish faced then number one ranked Syracuse in what can only be described as an instant classic. ND and the Orange exchanged punches the entire way, answering goal for goal, but Syracuse had a one goal lead late in the game, and it seemed as if they would leave South Bend intact. After a 3-0 run by Syracuse and with only a minute left, Notre Dame sophomore PJ Finley lined up for the face-off against the Orange’s Ben Williams, who consistently won 60% of face-offs. What happened next is still hard to believe: Finley won the faceoff, streaked down the middle of the field untouched, and unleashed the shot of his life. Finley tied the game with the first shot of his collegiate career, sending the game into overtime.

Finley is just one example of the number of players who have stepped up throughout the year to perform when needed. Whenever the Irish need a defensive stop, a successful clear, or a big save, someone seems ready to step up. Head coach Kevin Corrigan calls this year’s team his best practicing team, but I would venture to say it his best performing team in general.

In that Syracuse game, the Irish took over and won 13-12 in double-OT. Similarly, in the 1 versus 2 matchup with North Carolina, Matt Kavanaugh, Captain Clutch, led the Irish offense to score three goals for the win in the final minute. This year’s team has a lethal combination of an efficient offense, a stalwart defense, and an incredible ability to perform in crunch time. This combination is what has propelled the Irish to a number one overall ranking with the possibility of finishing the regular season ranked number one overall for the first time in the program’s history. In all of Coach Kevin Corrigan’s successful 27 year tenure, never has ND men’s lacrosse finished at number one overall. If this team were to do so, it would only be another example of the magic surrounding the team.

Notre Dame and Corrigan were understandably disappointed to leave the ACC Championships in Philadelphia earlier than expected. Despite Friday’s unfortunate setback against Duke, the expectations surrounding the Irish are still climbing. They are still an incredible team, and they have the chance to make a deep run in the only tournament that really matters. Hopefully, they will learn from the loss as they finish the regular season at Army and eventually enter the NCAA tournament. The defense has to remember they are capable of shutting out some of the top teams in the nation, and Kavanaugh, Wynne, and the offense need to be patient and find their offensive mojo again.

Nothing will be certain until the NCAA selection show airs on May 3. Only then will we be able to discuss the Irish’s prospects for making a return to Philly for the NCAA Final Four. I can only hope that a chance for redemption presents itself for ND to bury Duke in a rematch on the way to the program’s first championship. That’s the magic of May, however, because anything can happen, and nothing would be more magical than if this team could finally hoist up the championship trophy on Memorial Day.

If there was ever a time to start paying attention to Notre Dame lacrosse, it would be now.