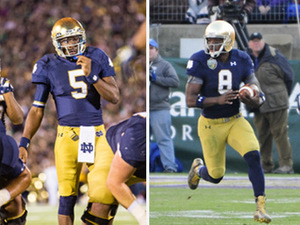 There is no real substitute for competition.

Notre Dame lived and died, for the most part, with a single quarterback taking snaps in 2014. It was primarily the year of Everett Golson, marked by the senior’s return to the field after a yearlong hiatus. That is, until a signature bowl victory over LSU, when sophomore Malik Zaire and Golson combined for a last second win in Zaire’s first career start.

Over the course of the season, brilliance was followed by inexplicable mistakes, and the team with a 6-0 start quickly fell apart, managing only a single win the rest of the way. Whether or not Golson will be returning to South Bend for his final season is still up in the air.

As Head Coach Brian Kelly reopens the starting spot at quarterback, featuring a mix of experience and fresh faces, the spotlight falls on four. Many believe the road to the playoffs goes through the play of its quarterback.

The state of the Notre Dame quarterback position can be deemed strong when you take a broad-based approach and consider the past. Most college teams envy a rich depth chart that features highly touted recruits Zaire, freshman DeShone Kizer and incoming freshman Brandon Wimbush, along with the National Championship experience of Golson.

Let’s look back five years. The Irish were bare enough at quarterback to feature former walk-on Nate Montana as the backup. While his pedigree was strong, Montana was a non-scholarship player, yet only an injury away from being the starting quarterback at a traditional powerhouse program.

In terms of the overall state of the program, the Irish are far better than they were at quarterback with their sheer talent at the position, and much of that has to do with the work performed by coaches on the recruiting trail.

Heading into 2015, questions remain. Will Golson, Zaire, Kizer or Wimbush become the commanding, dynamic player ND needs? Or will we see a combination of talent at the quarterback position?

The quarterback that can become that decisive playmaker will have the opporunity to lead the Irish back to double-digit wins. The top ten-caliber talent around the position can almost guarantee that. Let’s examine these quarterbacks and the advantages and disadvantages of each in order to catch a glimpse of potential courses of action for Notre Dame’s coaching staff in the search for a starter.

Everett Golson: Golson is a proven commodity. He was in the Heisman conversation during the first half of the season and has shown flashes of playmaking ability akin to Johnny Manziel at Texas A&M. Golson threw for over 3,000 yards, is very mobile and had over 30 touchdowns in 2014. He can make all the requisite throws, but he fumbles more than nearly any other quarterback at the NCAA level and had 14 picks this past season. Golson will be in his last year of eligibility, so 2015 is a make or break year for his NFL hopes. Desperation could bring out the best in Golson or cause him to press and become overanxious, producing frustrating results. He may be the odds on favorite to earn the job despite Zaire’s impressive finale.

Malik Zaire: Zaire is raw, but the potential is there for a new era of Notre Dame quarterbacking. Brian Kelly said during the season that Zaire needed to be more consistent in fully grasping the offense. Zaire has a live arm and the quickest feet of the Notre Dame quarterbacks. He can be truly electrifying in the read option and when he’s forced to improvise. He has seen limited snaps overall, so he is still relatively unknown. An efficient performance against LSU both rushing and throwing gives him a lot of momentum. Moving into only his second year of eligibility next season, the time is now for Zaire to show up and truly take command of the starting job. Starting Zaire over Golson may be a high-reward scenario.

DeShone Kizer and Brandon Wimbush: Kizer is the most prototypical Notre Dame quarterback in terms of size and tangible skills. At 6-foot-5, Kizer can see over linemen and has a projectable frame. Tall quarterbacks coached by Kelly, such as 6-foot-6 Tony Pike at Cincinnati, have seen great success in this scheme. Kizer received offers from Alabama and LSU and was rated as highly as No. 40 overall in the recruiting class of 2014. If Notre Dame wants to start from scratch and build, the redshirt freshman Kizer is the ideal choice.

Wimbush was the alternative recruiting option after Blake Barnett switched his commitment to Alabama. As a true freshman, he will likely redshirt in 2015 but is rated the No. 2 dual threat quarterback in the nation by ESPN. He runs a 4.62 40-yard dash and participated in ESPN’s Elite 11 quarterback competition. Formerly committed to Penn State, Wimbush could be a force for Notre Dame in the future, but may not be ready for game action just yet.