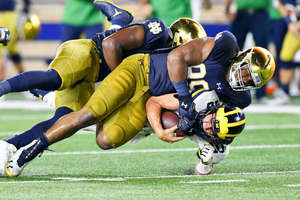 Take a second to put yourself in a pandemic-free world, and the Notre Dame football team would have just returned from Dublin, hopefully after a victory against Navy. With a win, all would be right in the world.

Sadly, this world does not exist, and instead, two of the Power Five conferences have postponed their seasons. On Aug. 11, both the Big Ten and Pac-12 postponed all fall athletics in a decision that was expected, but still disappointing to players and fans alike. The decision from both the Big Ten and Pac-12 has faced backlash, but each conference is standing by their choice.

Since the cancellation of spring and winter sports back in March, the question of whether college football would be played has been on the mind of almost every sports fan. Now, the answer appears to be yes, but with only three of football’s top conferences: ACC, SEC, and Big 12. Each conference is playing a 10-game conference schedule and one non-conference game for both the ACC and Big 12.

Every day there seems to be new and conflicting information coming out, making it appear that there either will or won’t be a season. Recently this news has been based on students returning to campus and the resulting rise in COVID-19 cases. With outbreaks at several universities around the country, it appeared as if the season would surely be canceled, but college football continues to roll with the punches, and FBS teams are still looking to kick off in September.

Another consequence of the pandemic is the number of star players who are opting out of the season to focus on the 2021 NFL Draft instead of risking their health. This list of players continues to increase almost every day, and as of Aug. 31, six of Notre Dame’s opponents have had players take this route, including Wake Forest’s Sage Surratt and Pitt’s Jaylen Twyman.

The teams in the SEC and Big 12 remain unchanged, but the ACC added another team for the 2020 season: Notre Dame. Some wondered why the ACC chose to save Notre Dame’s season, but in reality, it was the best-case scenario for both sides.

In 2012, Notre Dame joined the ACC for all sports except hockey and football, with the condition that the Irish would play five ACC football opponents a year. Up to this point, the agreement has boded well for both sides, and this summer it was Notre Dame who needed the ACC more than the ACC needed them.

As the summer rolled around and conferences started making decisions about how the season would be played, it became evident that Notre Dame’s schedule would be affected. The first domino fell in early July when the Big Ten and Pac-12 announced they would go to a conference-only schedule, causing the Irish to lose USC, Stanford and Wisconsin from their schedule. Notre Dame could have tried to scramble and throw together a schedule at the last minute, but they decided to give up their historic independence and join the ACC for this season.

This news became official July 29 with the release of the ACC’s schedule, which had the Irish facing off against Florida State, Syracuse, North Carolina and Boston College. Soon after, it was also announced that Notre Dame would be eligible to not just earn the conference’s bid to play in the Orange Bowl, but also the chance to be crowned ACC Champions. The Irish will only be playing in the ACC for the 2020-2021 season and will return to their independent status for 2021.

As of Aug. 26, Notre Dame is set to play an 11-game schedule with six home games and five road games. The Irish will face two teams who are ranked in both preseason polls: No. 1 Clemson at home and No. 18 North Carolina on the road. The Irish are scheduled to kick off the season at home against Duke Sept. 12.