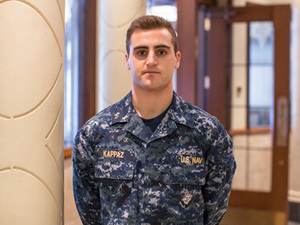 An Interview with Sophomore Michael Kappaz

As graduation approaches, most students worry about finding a job. Students in the Reserve Officers Training Corps (ROTC), however, have a different set of fears. They already have a job. Now they have to figure out how to do it.

Michael Kappaz, a sophomore aerospace engineering major in Naval ROTC says, “Everyone else graduates and they’re starting their career … It’s about them getting on their feet. When we graduate, I could be in charge of somebody who’s been in the Navy for 15 years. And he’s got to salute me.”

Students in ROTC train to become military officers, who have authority over enlisted personnel, regardless of the enlisted person’s age or experience.

He says this upcoming responsibility is on his mind constantly, and it changes the way he lives now, even when no one is watching.

“If I wanted to go work out in the morning, I’d wake up at 6 a.m. Half the time I’d be like, ‘Oh, I’m tired. I’m going back to sleep.’ You can’t do that,” Kappaz says. “It’s not about you. It’s not what you want to do right now. You’ve got to start setting habits now that you’re going to want your [sailors] to do once you’re in the Navy.”

He thinks he acts differently than he would if he weren’t in ROTC. “Definitely just not being stupid,” he says. “You get in trouble, and it’s a double whammy. You’ve got to just hold yourself to a higher standard.”

Kappaz is friends with non-ROTC students, and sometimes he has to stay back when they go out on the weekends. “They understand. They still give me crap for it,” Kappaz says. He says he still has a social life, but his current commitment makes him think differently about underage drinking laws.

“When you commission, part of the oath is ‘I swear to defend the Constitution,’” he says. “It’s the military. If it’s illegal, you don’t do it.”

While still at college he feels removed from the darker aspects of war, like the psychological effects of combat. “It’s on my mind, but I don’t know what to think.”

He recently saw “American Sniper,” a movie about former Navy SEAL Chris Kyle. It explores topics like PTSD and the harsh reality of war. “I thought it was really hard to watch, but I liked it a lot. It was just a heavy movie,” Kappaz says.

Kappaz always felt like he wanted to join the military, but he says, “I could never pinpoint [why] … Not because I’m a ‘military guy.’ I wasn’t into military stuff at all when I was in high school.”

He says that at Notre Dame, he began to realize what drew him to the military.

“Some mornings you want to go back to sleep, but knowing you’re doing something bigger than you, bigger than pursuing your own career and knowing you have a job in front of you too, and that’s a job serving your country and helping other people and leading men,” Kappaz says. “That’s just an awesome thought to have.”