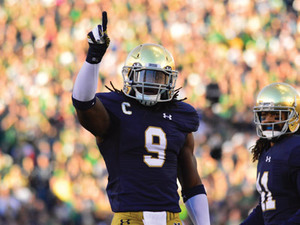 As early as last May, sports analysts began writing about which Notre Dame football players would be entering the 2016 NFL Draft. Considering the number of impressive players on Team 127, they’re right to be excited.

The story of Notre Dame’s draft prospects has continued to be interesting, with underclassmen having faced injuries, tough decisions and a Jan. 18 deadline to declare whether they would enter the draft or play another season with the Irish. However, amidst all the statistics and speculation, it is becoming easier to outline which Notre Dame players will be playing on Sundays beginning next fall.

Ronnie Stanley: Stanley, a pass-blocking stalwart at left tackle, has always been one of the country’s top NFL prospects. Last year, he was already seen as a top draft pick but decided to return to Notre Dame for his senior season. “My dream isn’t just to play in the National Football League. I want to win a national championship,” Stanley said. Although he wasn’t able to realize that dream with the Irish this year, Stanley is now predicted to be one of the first 10 players selected in the 2016 draft.

Jaylon Smith: This team captain and standout linebacker suffered a gruesome knee injury in the Fiesta Bowl. In the first quarter, Smith tore his ACL and LCL in his left knee, an injury requiring surgery and a significant recovery period. Despite the injury, however, Smith has decided to declare for the 2016 draft.

Smith was a star player for the Notre Dame defense, leading the team with more than 100 tackles for two years in a row. In December, he received the Butkus Award as recognition for being the top college linebacker in the country, and was predicted to be one of the first five players chosen in the draft. While the injury may hurt his draft stock, he should still be a first round selection.

Will Fuller: Until the Fiesta Bowl, Fuller had publicized his intention to stay at Notre Dame for another year and graduate. However, seeing Jaylon Smith injured in the last game of his career may have been part of what pushed him to enter the NFL while he still can. “My heart truly wanted to return to Notre Dame, but it has also been a lifelong dream to play football in the NFL,” he said. Fuller’s 14 touchdowns made this season exciting, and Irish fans will be sad to see him go.

KeiVarae Russell and C.J. Prosise: The cornerback and running back have a year of eligibility left, but both announced just days after the Fiesta Bowl that they would be entering the draft. Neither player is expected to be chosen in the first round, but each is highly ranked at his position and is hopeful about his future. “I have so much potential, and my ceiling is so high,” Russell said.

Nick Martin and Sheldon Day: Martin, a center, was a captain for Team 127 this year. The younger brother of Dallas Cowboys standout Zach Martin, Nick has an outside chance to be picked in the first round due to his toughness, leadership and positional versatility. Day, a defensive tackle, was also a captain for the 2014 season.  He is likely to go on the second day of the draft in round 2 or 3.

AND OUR HEARTS FOREVE Irish star Jaylon Smith departs for the NFL.