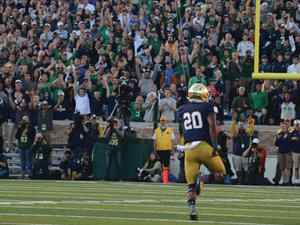 Football isn’t everything at Notre Dame, though some Fighting Irish fans seem to regard it that way. Still, it sure is something, something special for most students, alums and others associated with the university, even for avid fans who never have set foot on campus.

Unrealistic expectations are nothing new. Indeed, counting on the luck of the Irish to overcome play on the field, some ardent fans expect to be No. 1 in season after season. Notre Dame, alas, hasn’t won a national championship since 1988, long before present players were born, before many of their parents were old enough to follow the games.

There was some chance in that 2013 national championship game. Sort of.

Expectations for No. 1 were crushed, however, by an Alabama team that proved to be much better.

Expectations were sky high this past season after Notre Dame trounced Texas in that opening game. Texas, however, was terrible at season’s start. And the rash of injuries that were to deplete the Irish had begun, in preseason and then with the loss of star running back Tarean Folston in that opening game.

In the next game, at Virginia, starting quarterback Malik Zaire broke an ankle. DeShone Kizer, a redshirt freshman who was a third-stringer during spring practice, came in to throw a winning touchdown pass in a thriller.

“Next man in” became the motto. Starter goes down, as so many did, and a replacement comes in to help win game after game.

But not at Clemson. Notre Dame lost there by just two points to a team that went on to play for the national championship. Winds and rain from a hurricane made conditions terrible. On a dry field, would Notre Dame have won? Or would Clemson have won more decisively? We’ll never know.

Expectations remained high after such a narrow loss.

The Shamrock Series game against Boston College in historic Fenway Park provided warning: Notre Dame was struggling with those injuries, patching things together. How many next men or limping starters could play like a champion? The lackluster three-point win took Notre Dame out of realistic playoff contention.

Still, there was hope. A win over Stanford would be big. It almost happened. Until Stanford moved within field goal range and made that decisive last-second kick.

The luck of the Irish?

Not on that field goal. That’s what some with a faulty view of Irish luck would say.

Somehow, reference to the luck of the Irish has come to mean, especially among Fighting Irish fans, that good fortune will come, good luck will enable the Irish to win, “what though the odds be great or small.”

Historically, if one looks to Ireland, the Irish people haven’t had much good luck.

They suffered famines and invasions. They experienced less than friendly neighborliness from the British. The Easter Rising there a century ago brought no happy ending for organizers. Those emigrating to America saw job postings with, “No Irish need apply.”

“If you had the luck of the Irish,

You’d be sorry and wish you were dead.

You should have the luck of the Irish,

And you’d wish you was English instead!”

With that dismal interpretation of the term, the 2015 Notre Dame team did have the luck of the Irish. All those injuries. Lack of gold in the red zone.

By the Fiesta Bowl, there weren’t enough next men in to defeat Ohio State. The best defensive player, linebacker Jaylon Smith, tore up a knee early. Then his replacement went out with injury.

While Notre Dame lost by 16 points, the team never gave up, fighting back to make it a competitive game in the fourth quarter.

Expectations? The team, ranked 11th in the Associated Press preseason poll, finished 11th in the final poll. Maybe expectations beyond that were unrealistic. They certainly were as injuries struck.

Successful season? Winning 10 games and losing only to the second, third and fourth ranked teams in the nation by a total of only 20 points is not failure. Especially when those injuries, the luck of the Irish, struck hard.

For next season? Expectations are high. A championship? Maybe. Finally. If the luck of the Irish doesn’t strike again.

Jack Colwell is an adjunct associated professor in journaism.  He writes a political column for the South Bend Tribune and online for Howey Politics Indiana.  He is a member of the Indiana Journalism Hall of Fame and the South Bend Community Hall of Fame.

The views of this author are not necessariy the views of Scholastic magazine.

INTO THE END ZONE C.J. Prosise breaks free for the score.