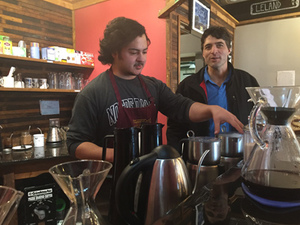 A FAIR PRICE The Local Cup allows each customer to choose a price for their coffee.

Whether you take your coffee black and piping hot for 75 cents or organic with chocolate syrup and and a side of social consciousness, South Bend’s The Local Cup is ready for you.

The volunteer-run cafe is about a 10-minute drive from campus, and serves ethically-sourced coffee with a unique, “pay-what-you-will” pricing scheme.

Co-founder Brook Hardy says the idea was the brainchild of four neighbors who met while walking their dogs. They live in a “transitional neighborhood,” she says, nestled between historic communities, Chapin Park and Riverside, and inner-city areas on the West Side.

The neighbors wished their neighborhood had a café that could serve as a meeting place — somewhere that would welcome everyone. Hardy says their conversations turned from “somebody should do this” to “who would do this?” and “how would they do this?”

In 2013, they took matters into their own hands and opened a “pop-up” coffee shop for one day during a neighborhood festival.

It was a hit, so the four co-founders turned the pop-up operation into a regular, weekly meeting place. They incorporated into a nonprofit and took over space in the Near Northwest Neighborhood building.

Because all four co-founders have full-time jobs, it’s only open on the weekends. And in an effort to include all neighbors, coffee is priced not by the cup, but by customers’ willingness to pay.

Hardy says they were afraid high prices would turn off certain groups. She worried they’d say, “Oh, that snooty coffee shop. I don’t go in there; I don’t pay three dollars a cup for my coffee.”

Instead, Hardy says baristas tell new customers, “Your coffee has already been paid for by a neighbor. You can take it as a gift if you’d like, or you can pay it forward.” They encourage customers to drop any amount into a jar on the counter; some give 20 dollars each week, and some can only afford to throw in change.

“We welcome whatever it is that you can give, or if you want to take it as a gift, then we are happy with that.” Either way, Hardy says, “we’re going to welcome you equally.”

The shop makes a little more than enough to cover the cost of raw material. They have free rent in the Near Northwest Neighborhood building and a grant from the Sisters of the Holy Cross paid for renovations and an internship program for teenagers.

All coffee beans are ethically-sourced. “We know that when we have Honduras coffee, that came from Rudy Carcamo’s farm in Honduras. We know his name, and we’ve seen photos of him,” Hardy says. They also know he earns a fair price when they buy from him — 150 percent better than if he were to sell fair-trade. “We want everything we do to be as ethical as possible, even if that’s for the local people that the coffee comes from, halfway across the world.”

Hardy is no stranger to the Near Northwest Neighborhood. “I grew up here and said, ‘I will leave this neighborhood as soon as I can, and I’m never coming back.’ And I did leave,” she says. “I moved far away.”

But by 2008, in the heart of the housing crisis, she found herself right back in the town where she grew up — the same streets where, as a child, she remembers neighbors selling their homes, fleeing to suburbs. Her mother, who still lives in the neighborhood, “weathered some pretty rocky times,” she says.

Hardy says since then, the mood has changed. “Even since we’ve been here in 2008, we’ve seen tremendous growth. It’s sort of like we’ve reached a tipping point,” she says.

The Local Cup buzzes with optimism for the future of the neighborhood. The walls are covered with paintings from local artists, a 55-and-older group has begun to meet for coffee every Sunday, neighbors have purchased local real estate — signing the papers over Local Cup joe — and a racially diverse group of about 75 filled the small shop for a slam poetry festival — the first of many, Hardy hopes.

“This neighborhood is a microcosm of a lot of the community issues we’re dealing with in the country — particularly around issues of income disparity, race,” Hardy says. “We face all of those in our neighborhood, as well as a really strong and deep desire to bridge those gaps and to create real and lasting community.”