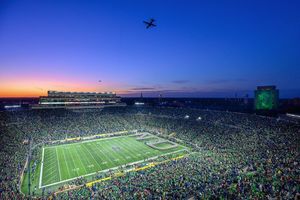 Like almost everything else, the future of sports may be changed forever because of COVID-19. Currently, all professional and collegiate sports have been postponed or canceled; Wimbledon and The Open have also been canceled. This has led to the question: when will we get sports back?

There seems to be light at the end of the tunnel. Recently, President Trump met with 14 commissioners of the professional leagues in the U.S. regarding the start of the NFL season. The verdict was hopeful: As of right now, the season is slated to start on time. This is not only a relief for football fans, but also for all sports fans, as they can look to the late summer or early fall for a return to regularly scheduled sports programming.

Of course, this is still tentative and a lot could change; no one knows how COVID-19 will continue to progress, so there are countless possibilities for what happens next with sports, and I will present both the worst-case and the best-case scenarios.

The worst-case scenario is that sports are canceled until at least the end of 2020. This would mean the cancellation of the entire MLB season, the whole NFL season, all fall collegiate athletics, a shortened NBA and NHL season and likely no winter college sports. This would leave fans forced to watch game reruns for the next eight months, which is something no one wants. This cancellation would be to protect players because until a vaccine is available, any activity requiring close contact cannot be deemed safe. This situation is unlikely though, as leagues and teams cannot afford to be shut down for a whole year.

One possible solution would be operating sports events without fans in attendance, which could start as early as August. This situation seems most plausible in my opinion: by August there should be enough tests available for the players on every team. This would be a step forward for sports fans as they would be able to watch their favorite teams play again.

There are questions of feasibility, however. First, players like Lebron James have said that they would not be happy about playing in an empty arena, and it is likely that other players around the country feel the same way. Would general managers and owners even be willing to put their players on the court when they are not receiving any money from fans at the games? Despite these issues, I believe any sports fan would be in favor of this situation over no sports at all.

The best-case scenario for sports fans is that the MLB, NBA and NHL all resume play starting in late May or early June. This is what the MLB and NBA are pushing for, but for this to work out, a lot must happen in a short period of time. First, the country needs to hit the peak point of the coronavirus curve, which, though likely, can’t be guaranteed. Next, players would need to be in favor of playing in a predetermined location without fans present and would need to understand the risk of being in contact with so many other players and personnel.

This is the ideal situation, as fall college sports and the NFL could start on time, and next year’s NHL and NBA seasons would not be delayed too much. It also sets up a dream situation for big sports fans: college football, NFL, MLB regular season, NHL Stanley Cup Playoffs, NBA playoffs and golf majors all on television at the same time.