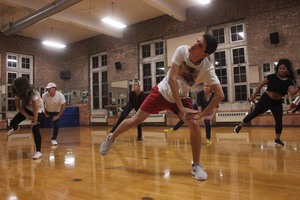 Dance to express, not to impress.” Project Fresh lives their motto to the fullest. As a free-form dance group, P-Fresh keeps it fresh with unscripted dance performances in the dining hall and no requirements to join. The founding members coined the group’s name to advertise their “work ethic and tenacity,” says Isaiah LeBlanc, Vice President of P-Fresh. The group appears in events across campus and always performs new material.

Unlike other clubs and organizations on campus, P-Fresh adapts to its new members and leadership. “Every year is a new ‘project’ due to ‘fresh’ minds,” LaBlanc says. “Someone doesn’t have to fit a mold to be part of P-Fresh — Project Fresh is shaped by the interests of its members.”

Practices are held three times a week for two hours. Each session is divided in half: one hour to learn choreographed routines that will be used at a later performance, and an hour of free time “to freestyle dance and work on their skills.” Students of any dance experience level are welcome to come to as many or as few practices as they wish. “No one is forced to learn anything that he or she doesn’t want to learn. The focus of the group is not to be a cutthroat performance group; but instead be free, open and accessible to anyone interested,” says LeBlanc.

Love of dance unites this community. “We are a ‘P-Fam.’ This isn’t just a group of people who go to dance together; it’s actually a family who deeply cares about the well-being of one another.” With free-from structured regulations and auditions, the group fosters acceptance, community and individuality. “I became a member because Project Fresh celebrated the diversity I brought to the group, and that was one of the best feelings in th world,” LeBlanc says.

Experience the freshness during the spring semester at Welsh Family Hall’s Dance Fest, the First-Class Steppers Show, Latin Expressions and the Project Fresh Show. P-Fresh’s headliner show is at Stepan Center on April 22, 2017. The performance culminates in an open dance party with the audience.