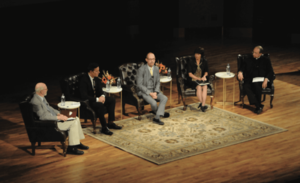 When Juan Carlos returned to Notre Dame, he choked up while walking around campus and remembering his time at the Moreau Seminary. As a young seminarian, he hadn’t yet shared what had happened to him, but now Juan Carlos Cruz, an advocate for victims of clerical sexual abuse, is open about being a survivor himself. During his time at the university, he found healing and solace walking around the Grotto. Cruz was critical in bringing the Church’s abuse crisis in Chile to Pope Francis’ attention. This year, he returned to the university as part of a panel that would delve into the sexual abuse scandal within the Catholic Church.

The Sept. 25 panel, “The Church Crisis: Where Are We Now?,” was the first keynote event of the university’s 2019-20 forum, “‘Rebuild My Church’: Crisis and Response.” The panel is an initial step for the university in addressing the crisis.

John Allen, editor of Crux, a Roman Catholic news website, moderated the discussion. He said of the speakers: “I can promise you, any one of them, easily, by [themselves], could have sustained a fascinating conversation,” he said. In addition to Cruz, the panel included Archbishop William E. Lori of Baltimore and journalist Peter Steinfels, who has reported on the crisis for about 30 years. Also present was Kathleen McChesney, former FBI executive assistant director who helped establish the Dallas Charter for the Protection of Children and Young People in 2002.

In his initial remarks, Steinfels recognized the decrease in clerical sexual abuse in the U.S. over the past few decades — but warned about the limitations of statistics. “They can blind us to the excruciating, life- derailing devastation caused by a single case of abuse,” he said. “As Kathleen immediately pointed out, one case is one too many.”

Elaborating on his time at Moreau Seminary and his healing process, Cruz reflected on his personal journey: “I have remained Catholic because I decided very early on that I wasn’t going to let them win,” he said. “I wasn’t going to let the bad ones win. Because I believe that the relationship anybody — man, woman, any age — has with God is the most basic human right.” But every survivor’s situation is a world of its own, Cruz pointed out. He considers himself lucky to have platforms that allow him to support other victims.

After discussing the disappointments she has experienced in her career and the grim predictions she has about the crisis, McChesney urged the audience not to “let our tiredness, our sadness, overtake our passion for continuing to work on these issues.” She drew attention to the reality that vulnerable adults also suffer abuse within the Church, and that offenders can be nuns, teachers, volunteers, consecrated people and music ministers.

Archbishop Lori has certainly had experience with the bureaucratic complexities of dealing with accusations. “I’ve been a bishop [for] nearly 25 years and in that ministry, there have been a lot of learning curves,” he said. “But I don’t think any of the learning curves have been as steep as discovering, learning and struggling to deal in some adequate way with the ugly specter of child abuse.” He emphasized about the need to listen to and believe victims.

Grace Murphy, a sophomore from South Bend, asked what the panelists would say to the new generation of Catholics who face the challenge to “support the survivors, justly punish the abusers and turn an eye of scrutiny to the leaders.” Steinfels commented on the “thoughtful, critical attitude” of this new generation, which he believes will make a difference. Cruz then underscored the importance of continuing to question, modernize and get involved in the Church and emphasized that this generation is leading survivors.

Archbishop Lori emphasized a new “metropolitan model” that oversees dioceses, in order to review allegations against bishops, where investigations are led by a layperson. In the same vein, the panelists also discussed the role of lay people, especially women, in the Church. A greater inclusion in the investigation processes and increased involvement in the support of local priests and parishes seemed to be the consensus.

After calling for an in-depth study of the Church’s history of abuse, Steinfels issued “a plea that Catholic institutions of higher education like this one take up this essential task.” He said, “It has been said that we walk backwards into the future, looking at our past. A genuine history is needed for our future.” It is up to Catholic institutions of higher education to equip its students with the necessary tools — facilitated by study and deep conversation — so that they may go out into the world and into the Church, ready to approach this crisis with compassion and determination.