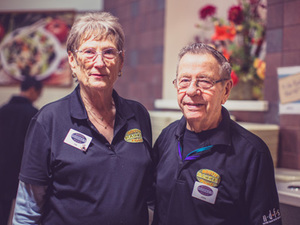 Walk through the broad doors of South Dining Hall and veer automatically to your right. Pull out the ID while simultaneously looking up, and choose which monitor to go to this evening: left or right. Depending on that choice, listen to the kind words asking about your day, or, conversely, an emphatic endorsement of what exactly is on the menu for dinner that night followed by a riddle.

Since 2007, this ritual has become as familiar as the family dinner table for countless Notre Dame students, alumni and visitors. This unique kind of comfort is brought about through the actions of John and Lila Ritschard, SDH monitors, who have been working for the university since 2007 and 2006, respectively.

The two have a union that is as magical as the countless students who are greeted by them would suspect. With very large families, the two were both widowed by the time Lila moved back to the area after retiring from various jobs. She went to beauty college and began teaching nail application, eventually finding work in a beauty shop. Her friend, who ran the shop, began putting coupons for free haircuts in a coupon book, to advertise to potential clientele. Then, one day in January of 1999, there was a bad snowstorm predicted, and Lila came into the shop in the morning to cancel the appointments for her scheduled clients.

“In stumbles John over the snowdrifts for a free haircut,” Lila recalls with a laugh, and they immediately struck up a conversation. Despite Lila not being interested in seeing anyone at that point, John “swept her off her feet,” according to him, and after Lila asked him to her monthly Friday dinners at her church, they were married within three months. It will be sixteen years of what Lila calls a “wonderful ride” come April.

Lila began work as an SDH monitor after following a friend to the dining hall; John, after being declared too old to continue his truck driving job a year later, followed her. They’ve always worked together, in large part because they only have one car, but also because they love working the late shift, until closing. It is a rather unique request for them both, and one that is special to the dining hall, which normally does not like to pair family members together for fear of joint conflict and sickness, according to the duo.

The married couple, who began these jobs as part of their “retirement” and refer to themselves as “Mom and Pop,” estimate that they swipe in roughly 2400-2500 students per night. These countless interactions, by far, constitute their favorite part of working here.

“We have the most fun with the all the students…It keeps us young,” says John. “It’s something to look forward to,” he says. “It’s fun for us.”

Lila also enjoys her job. She was once asked by a group of sophomores to give a speech, along with two other speakers, for a dorm event on random acts of kindness. While questioning how qualified she was to give it, she went along and presented, assuming it would make no impact in the long run. Two years later, before he graduated, a student came to her and told her that the talk changed his life.

“Everybody touches people in their lives,” Lila says. “You may not ever know that you did.” Even now, she remains “so touched and totally amazed that this young man remembered it and took the time … to stop and say ‘you made a difference.’”

This is indicative of a woman who speaks of the “many adopted grandchildren over the years” that she has gained from working as a monitor in addition to her own children and grandchildren. She describes the students of Notre Dame as “dynamite” and “the most wonderful bunch of people you could ever have in your life.”

She attempts to speak to every single person who walks in through the entrance or out through the exit, which she covers after her card-swiping shift. She says she doesn’t mind if they don’t respond. “If I can make someone feel a little bit better for a day,” she says. “Just for a moment … lift them up a bit. I can do that much.”

This attitude can be seen through the work the couple does with a mission in Tapachula, Mexico, which essentially takes care of children whose parents have been sent to prison.  John and Lila work on sending birthday cards every year to these children, as well as compiling packets and backpacks. Currently they are working on this project, which requires roughly 40-50 backpacks; these can be donated if in good condition.

Lila describes the card-swiper post as the perfect job to retire to and says she loves working with her husband — the dinner shift, when scheduled, occurring after daily games of Dominoes and Farkle at their home. John says that they would miss working in the dining hall if they were to ever truly retire. He previously worked in real estate and as a truck driver. They’ve created a makeshift family in the dining hall, one that has produced countless relationships inside the walls of the dining hall and out.

This connection became especially evident almost two years ago, when John developed a bad case of pneumonia and was in the hospital, sedated, for a week, and in the process missed three months of work at the dining hall. “The students here were all concerned; many came up and visited, which I was very grateful for,” he says. Despite the illness and recovery, he is now in good health, once again.

The two of them have become South Dining Hall and Notre Dame institutions. As freshman psychology major Sheila Roohan says, “If you weren’t already happy knowing Mac and Cheese was on the menu, then having John and Lila remind you will make your day that much better.”

In response to students who oftentimes come up to the couple to extend their gratitude, Lila responds with a simple appreciation: “It’s our blessing.”

For students, days on campus are sometimes long and can seem unimaginably difficult by the time routine calls for a walk to SDH. Walk in through those doors. Pull your head up, and feel the weight evaporate off your shoulders as soon as you see the grin on John’s face and hear a caring question from Lila.

“We pray for them every day,” Lila says. “Everyone who walks through those doors.”

If you are interested in donating gently used or new backpacks to the mission in Tapachula, Mexico, please contact: Tessa Bangs at Tessa.A.Bangs.3@nd.edu.