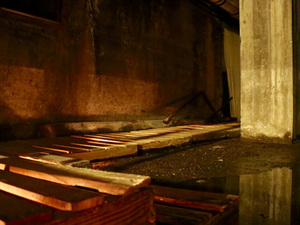 “It’s an experiment in reuse, impermanence and adaptability,” Birdsell Project co-founder Myles Robertson told me as he led the way through the labyrinthine basement of South Bend’s Commerce Center. “[It] seeks to revitalize underutilized spaces by opening them to artists and the community.”

I had to step carefully — between the remnants of artwork from the last installation of site-specific pieces were small pools of standing water, industrial equipment and artifacts left over from the space’s past life as a hydroelectric plant.

This space, like all those that the Birdsell Project utilizes, was abandoned until their intervention. Now, these abandoned and previously unused areas in the city serve as places for artists to create and share work with the community.

The project was the brainchild of Robertson and co-founder Nalani Stolz. The concept appealed to each differently; Stolz, an artist herself, was intrigued by the use of abandoned spaces for art and the thematic opportunities in the integration of the two, while Robertson approached the idea from a background in sustainability and community service. His intention was to generate interest with which he might change the perspective of what these abandoned spaces really are.

“You can look at these abandoned places as eyesores,” Robertson says, “or you can see them as an opportunity.”

In the fall of 2014 the duo was granted access to South Bend’s abandoned Birdsell Mansion. Built in 1898, the 12,000 square foot mansion lies just outside of downtown, near the historic district.

It was here that the first large-scale, site-specific installation took place. It featured the work of 20 different artists, selected from a large and eager pool of applicants. They filled every room of the mansion with art: pieces that incorporated and played off of the building’s structure and state of partial decay. The debut installation saw more than 3,000 visitors in its two-month run. Since then, the mansion space has been used for theater productions, film sets, concerts, and more, and the project has expanded to new spaces in the city.

Last summer, the Birdsell Project initiated its summer residency program, for which they housed 11 artists from around the country for two months. During this time the artists created pieces for display in the mansion, while each partnered with an organization in South Bend to provide an artistic service — teaching classes, fundraising and generating attention through art.

“The idea is to integrate the artists into the community,” Robertson explained, “so that they aren’t just isolated artists in this weird space, but rather that they engage with the community in some way.”

Robertson hopes that this engagement will generate attention for creative opportunities in South Bend. “That’s a part of my end game,” he says. “South Bend is an affordable place to live, population is on the rise, investment is growing — it’s a great time to plug into it. I’ve seen artists begin to realize that South Bend is a great place to hone and showcase their craft.”

Notre Dame Professor Mark Welch supports the project’s mission, and uses the Birdsell Mansion for his drawing classes so his students can experience the same creative energy. The Birdsell Project has also worked with and provided space for a senior thesis performance and group get-together for Notre Dame students. It’s an answer to the difficult question of how to better integrate students into the community outside of the bubble of campus.

“There’s a real desire on their part to bring the students into contact with the city’s past — to help deepen their understanding of this their current home, however temporary, and to help them voice their response through art,” Welch says. “I think it’s critically important to get our students off campus and into the community. These kinds of events can do a lot to break down the stereotypes in both directions.”

Just as important as the physical creation of integrated art in these spaces is the community it inspires, Welch suggests. The art becomes a catalyst for conversation and contact.

“When you think about it in terms of revitalization, these places literally transition from dead, empty spaces to vital points of activity, conversation, energy,” Welch says. “It’s not the art that brings the place to life, though. It’s these incredibly diverse groups of people coming together to engage with the art and the space and each other. It’s intriguing to see someone else’s response to the space manifested as a physical work. And it’s just as interesting to listen to people try to come to grips with it all.”