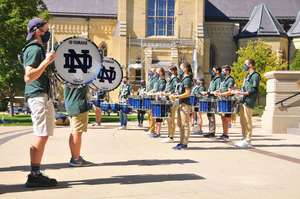 When students and staff stepped into Notre Dame Stadium on Saturday, Sept. 12 for the first football game of the season, they knew it would look different than last year. Capacity was limited to 20%, with students socially distanced by “household.” There were no concessions, and no tailgating, either. And perhaps saddest of all, there was no halftime show from the Notre Dame marching band.

Spread amongst the northwest bleachers, the Band of the Fighting Irish was still an indelible part of the game day experience. But the pandemic has challenged some of the group’s longest-running traditions, many of which were thought to be integral to the ensemble’s identity.

In addition to the loss of halftime shows, the 2020 season is uniformless; instead, members wear The Shirt and other Notre Dame merchandise. There are also no pregame performances, a highlight of game day both for players rushing out of the tunnel and students cheering on from the stands. Practices and performances are socially distanced, with the band evenly split between two practice groups, “Gold” and “Blue.” And to abide by the mask-wearing mandate, the band has developed specially designed face coverings through which the winds can play their music.

Many sections of the band have also lost traditions unique to their instruments. Junior Erin Swope, an alto saxophonist, misses “Saxes in the Stalls,” when her section would storm the bathrooms of the main building to play a rousing rendition of the Notre Dame Victory March to unsuspecting patrons. “Seeing surprised heads pop out of stalls is always hilarious,” she said, “but it’s had to take a hiatus.”

In response, sections like the saxophones have adapted their traditions to meet public health and safety guidelines. Sophomore Sean Ford, a member of the mellophone (or “Falto”) section, described how he and his bandmates have worked to build community in spite of the protocols: “We plan virtual and physically distant activities,” he explained, “like a Falto section Netflix party and distanced section dinners following rehearsals.”

Many have wondered if a season is worth it in the face of so much change. But the Band is adamant that the magic’s still there. “It is 100% still worth it,” Swope said. “When we came back from the summer, our directors talked about how the band has played through another pandemic, wars and just regular, old bad days.”

“Our spirit is still here, and we’re trying to bring it to everyone else, too,” she added.

First-year flutist Caitlin Cunningham agrees. “I feel like I’m part of something bigger than myself,” she said, “and I’m so grateful for that.”

Ford spoke of the Band’s resilience: “We’re still the Band of the Fighting Irish, and as long as we’re around, you can expect us to make the most of whatever situation is thrown at us.”