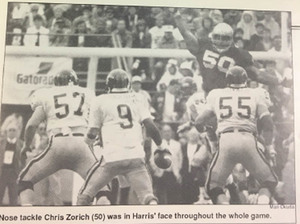 Around this time in 1988, nobody was crying, people weren’t calling for coaches to be fired and there was a bowl game to look forward to. That bowl game, however, wasn’t just any bowl game. It was the National Championship, the “granddaddy of them all.”

Kevin Boughal was the Scholastic writer in 1988 who had the privilege of recapping the National Championship game after the Irish smoked West Virginia 34 to 21 with, as Boughal put it, “a major defensive effort and heck of a passing attack.”  He recapped the game, reminisced on an undefeated season and posed the question, “Can the Irish repeat?”

Thinking about repeats is nearly impossible to do right now, and thinking about National Championships is just as painful, considering the team’s recent season. So it’s always nice to look back on how happy students used to be.

Two years before the 1988 National Championship, however, Lou Holtz led the Irish to a 5-6 season, which is almost as bad as we did this year. So who knows? Maybe in two years we won’t have to cry ourselves to sleep anymore.