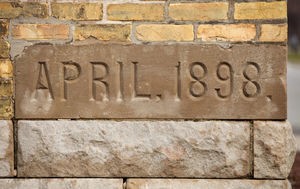 In the December 1978 issue of Scholastic, English major T. Peter O’Brien argued his position for saving the old fieldhouse in an article titled, “Where Passion and Precision Have Been One.” The original, 75,000-square-foot fieldhouse opened in 1898 and served as a multi-purpose arena for Notre Dame sports as well as a home for Notre Dame’s art department. O’Brien’s article explains that the lack of attention and maintenance given to the fieldhouse by the administration caused it to fall into a state of disrepair.

“The roof leaks. The plumbing ... is deplorable. Year by year, the brickwork becomes weaker and less aesthetically pleasing. And yet,” O’Brien continued, “The building means something.” To many students and faculty, the Fieldhouse was more than just an old building — it symbolized “the spirit of the fine arts: the energy, the enthusiasm, the spontaneity.”

With the steady growth of the engineering, science and business schools, O’Brien feared the impact the demolition would have on the arts and letters program. Despite his doubts, he expressed hope for the future: “The University finds itself at an educational crossroad ... Now is the time when the intellectual, critical and artistic life of the students needs not only to be encouraged, but nourished with commitment.”

O’Brien’s impassioned article reminds us of the importance of a liberal arts education and draws us into a larger conversation regarding the “educational crossroad” many students face during their academic careers. Each time we pass the original brick cornerstone on Fieldhouse Mall, we can remember the lasting impact the fieldhouse had on Notre Dame’s campus.