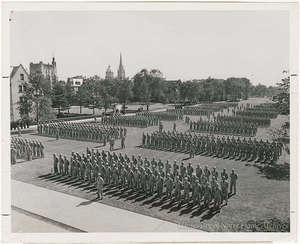 For over 150 years, Scholastic has served the Notre Dame community and borne witness to some of the most pressing crises to challenge the university, the country and the world. From the turmoil of the First World War to the social ferment of the 1960s, the university has always stubbornly persisted against seemingly insurmountable odds, ultimately emerging stronger and more united than ever after each hardship.

Presently, Notre Dame is undergoing another such crisis. With the administration’s decision to return to campus for in-person instruction, students are now being asked to sacrifice what were once foundational aspects of their lives — social functions, intimate interactions and with the recent announcement, in-person instruction — in order to defend the health of the campus and local communities. Such changes fundamentally transform the college experience into an unrecognizable world of anxious daily dashboard updates, swirling rumors of positive cases, the ever-present danger of an outbreak leading to the total closure of campus and, even worse, sickness and death.

Yet, we are not alone in confronting such a harrowing situation. Amidst the rage of World War II in the Aug. 14, 1942 issue of Scholastic, the students of this university faced a similarly complicated, unstable and daunting environment.

At the onset of the fall semester, President of the University Rev. Hugh O’Donnell, C.S.C. issued a letter to the student body in order “to keep the students accurately informed of developments vital to their welfare in the current emergency.”

In this statement, O’Donnell reminded students that “in times of stress, the family of Notre Dame stands together.” In parallel, current President Rev. John I. Jenkins, C.S.C. issued a unifying statement in the wake of the COVID-19 pandemic and nationwide racial justice protests. When the university announced its intentions to reopen, Jenkins affirmed that “together, we can do this.”

After some announcements, O’Donnell then closed with a piece of advice for the coming turbulent months: “If you are tempted to become discouraged, as you may be; if the problems that confront you seem insurmountable... turn to her, strong in the knowledge of her power as the mediatrix before the Throne of God.”

Stay strong Irish, turn to mother Mary in moments of strife and keep fighting to do the right thing.