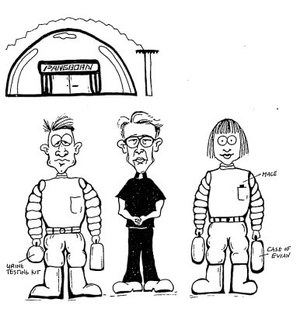 In the Feb. 20, 1992 issue of Scholastic, students James Gannon, Catherine Sheehy and John Daly argued for a co-ed dorm system in recently emptied Pangborn Hall. Gannon hoped that Notre Dame would eventually adopt a co-ed dorm system, pointing to overwhelming student support. He even argued for Pangborn becoming co-ed in exchange for residents sacrificing possession and consumption of “chemicals, among them alcohol.”

Gannon wrote that “male-female relations at Notre Dame are inexcusably poor” because of segregated dorms; “men and women have little opportunity to truly know each other outside of the classroom or the sexually-charged atmosphere of the Domer party.” Gannon also attributed “the unrealistic perceptions and expectations of the opposite sex responsible for a large part of the sexual hostility and self-destructive behavior found on this campus” to the single-sex system. Co-ed housing, he said, would allow men and women

to interact daily and “know each other for who they are. Not objects. Not enemies. Just people.” Around the time of the publication of Gannon’s piece, other Catholic universities were accepting co-ed housing.

Gannon’s article ends with a call for all students to take action in making their opinions known to campus media, the administration and other sources. Despite Gannon’s entreaty, the single-sex dorm model remains on-campus students’ only option. The university continues to refuse to alter parietals and, in a recent decision, has mandated that students reside on campus for six semesters.