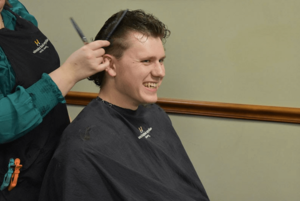 “In the life of every normal young man there comes a time when the cultivation of hirsute adornment is looked upon as being both appropriate and desirable,” said senior M. Joseph Tierney in his Scholastic article “The Shaggy Upper Lip.” His piece was published on March 26, 1921; however, the examination of peculiar male fashion choices still resonates with many Notre Dame students 100 years later.

As the spring semester of 2021 began, the men of St. Edward’s Halls attempted to revolutionize and repopularize the mullet with only the bravest of souls willing to give both the mullet and the mustache a go.

While it may be seemingly ridiculous for St. Edward’s “gentlemen” to advocate for the business-in-the-front-party-in-the-back style, the community’s unique fashion statement is rooted in care for the global community, as much as the eyes of the local community might (or might not) suffer.

Since 2013, the men of St. Edward’s Hall have partnered with the Nothing But Nets charity to create the fundraiser “Mullets Against Malaria,” raising thousands of dollars to purchase mosquito netting to prevent malaria in global communities affected by the disease.

Men’s fashion certainly has its ebbs and flows, especially when it comes to hairstyles on college campuses, but the men of Notre Dame seem to vary widely on their hair preferences. Whether that be opting for the aforementioned mustaches and mullets or sporting clean-shaven faces and closely cropped hair, the Scholastic community looks forward to more eccentric styles and even more community service.