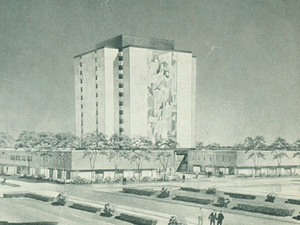 Nowadays it seems like campus is always under construction in some way, shape or form. It appears that students from just over a half-century ago might have felt the same way.

In the September 30, 1960 issue of Scholastic, Tom Weiss writes about the Ford Foundation identifying Notre Dame as “one of the world’s leading centers of higher education.” Due to this, the Foundation gave a conditional grant of $6,000,000 to the university, with the full amount having been contingent upon Notre Dame raising an additional $12,000,000 from its friends and alumni. As part of the Ford Foundation’s Special Program in Education — with $46,000,000 pledged in total to five universities — this grant was the largest in Notre Dame’s history at the time, fulfilling what Rev. Theodore Hesburgh, C.S.C., then the university’s president, said was “an answer to our deepest hopes.”

At the time of this story, Fr. Hesburgh had just designated certain “top priority” projects in the $18,000,000 fundraising effort — among them new buildings; endowed professorships and increased salaries; scholarships, fellowships and the like; and other administrative purposes. This plan was to be executed in conjunction with the advent of the Ford Foundation grant, with the additional $12,000,000 to be raised within the next three years.

These resources would help to create what is now one of campus’ most recognizable landmarks: the Notre Dame Memorial Library — or what would, fittingly, come to be called the Theodore M. Hesburgh Library.