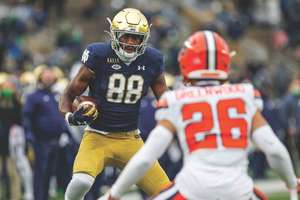 A week before their final regular season game against a struggling Syracuse Orange team, the Irish had been notified that they would be competing in the ACC Championship regardless of the result. Nevertheless, there was plenty to play for.

Despite giving Clemson a run for their money earlier in the season, the Orange’s 1-9 record gave the undefeated Irish a sense of ease going into the last regular season game. Yet, Syracuse started off strong, holding Notre Dame to only three points in the first quarter.

Notre Dame’s first drive was promising, including a 29-yd pass to Ben Skowronek. However, as they took the ball the 73 yards down the field, they failed to make it into the end zone and settled for a 25-yard field goal by Jonathan Doerer.

For the rest of the first quarter, the Irish and the Orange traded punts, Syracuse’s defense successfully containing the Irish’s offensive weapons.

Surprisingly, Syracuse’s first drive resulted in a touchdown and with that took the lead, causing Irish fans to become uneasy. The Notre Dame offense was going to have to wake up and it took them until the end of the first half, but after a very slow 27 minutes, they finally did.

Astonishingly, they managed to score three touchdowns in three minutes. For the first touchdown, Ian Book did what he did best, scramble. Seeing that no one was open, Book took advantage of the open right side and showcased his physicality. Ending his 28-yard run, Book dodged a tackle at the 5 and barreled through a Syracuse defensive back into the end zone, ending the Irish scoring drought. His moment of individual brilliance must have inspired the defense as senior defensive end Myron Tagovailoa quickly stripped the ball from the Orange quarterback and it was recovered by Marist Liufau on the Syracuse 21. The Irish took advantage of this field position and Book found McKinley who ran it into the end zone for the Irish’s second touchdown. Next came an impressive showing by the Irish defense, forcing a quick three-and-out, giving Book and the offense another chance with only 38 seconds left in the half. The opportunity was not squandered as Book led the offense on a quick 68-yard drive, culminating in another touchdown by McKinley. Despite a slow start, the scoreboard reflected the team’s dominance with a 17-point lead at the end of the first half.

Syracuse continued to hold on, scoring a touchdown early in the second half, but Irish captain Ade Ogundeji forced another fumble and the Irish offense did not fail to capitalize on the good field position. Another scramble by Ian Book into the end zone restored the Irish’s halftime lead (31-14). The Irish ended the third quarter with yet another connection between Book and McKinley for another score (38-14).

With seven minutes to go in the fourth quarter, freshman Chris Tyree cut through the Orange defense and left them in the dust on his 94-yard path to the end zone. This remarkable finish capped off the Irish’s remarkable season with a final score of 45-21, securing Notre Dame’s undefeated regular season.

Sophomore Kyren Williams finished the game with 110 rushing yards, putting him over the 1,000-yard mark on the season. Williams had stated this was one of his goals going into the fall and attributed his success to the physical offensive line.

On his big day, Ian Book finished with an impressive 285 yards and five touchdowns (three passing, two rushing) and secured his place in Notre Dame history as the quarterback with the most wins.

Brian Kelly reflected on his team’s success by humbly stating that it was “extremely gratifying to finish the season the way we did.