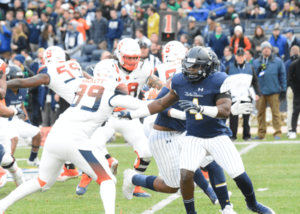 Reaching the penultimate week of the season with a perfect regular season squarely within reach, the No. 3 Fighting Irish arrived in New York sitting at 10-0 and set for their annual Shamrock Series game. Awaiting them at Yankee Stadium was the team few expected to be their highest-ranked November opponent: the No. 12 Syracuse Orange.

“We’re treated great here at Yankee Stadium,” head coach Brian Kelly said after the game. “We’ve been here three times, and each time we come back, it’s been a really great experience for our football team.”

After both teams punted on their respective opening possessions, the Irish struck first, as junior quarterback Ian Book found senior running back Dexter Williams for a nine-yard touchdown. The Irish defense locked down the Orange on the ensuing drive, a theme that continued throughout the afternoon. Syracuse’s longest drive until the fourth quarter gained 33 yards and consumed 2:39 on the clock. That drive, however, ended in a punt, part of a seven-drive sequence to open the game for Syracuse that alternated four punts and three interceptions.

Midway through the opening stanza, Syracuse quarterback Eric Dungey rushed four yards before being tackled by junior defensive end Adetokunbo Ogundeji and freshman defensive tackle Jayson Ademilola. Dungey exited the game with an upper-body injury and did not return, a crushing blow to an offense that had excelled with him at the helm.

The Orange felt Dungey’s absence. Until the fourth quarter, Syracuse mustered only one more drive lasting at least two minutes, and three of its drives ended with either zero yards gained or a net loss in yardage. Syracuse had one play gaining more than 20 yards; Notre Dame had six.

Junior safety Alohi Gilman keyed the defense’s success, and Kelly rewarded him with the game ball. Entering the game without an interception during his Irish career, the junior intercepted both Dungey and backup quarterback Tommy DeVito in the second quarter and added eight tackles.

“He was all over the field,” Kelly said. “And his play was infectious because he was outstanding on special teams as well.”

“I think we were pretty confident in our game plan early on,” Gilman said. “The first quarter, we got used to their tempo, so it was pretty easy at that point.”

Meanwhile, the offense found its rhythm and never looked back. Senior kicker Justin Yoon added a pair of short field goals to push the lead to 13-0 after a quarter of play.

The only score in the second quarter finished off Notre Dame’s shortest drive of the game. After Gilman returned his second interception to Syracuse’s 9-yard line, sophomore running back Jafar Armstrong raced in on the ensuing play to hand the Irish a 20-0 lead heading into halftime.

The second half mirrored the first as Syracuse punted on its first three drives after halftime. Yoon added another field goal, and Book found junior wide receiver Chase Claypool on a 10-yard strike to stretch the margin to 29-0 with 9:30 remaining in the quarter. Claypool paced all Irish receivers with 98 yards in the game on six receptions, second only to senior Miles Boykin’s seven.

To label the fourth quarter as dramatic would be hyperbole, but anticipation mounted on the Notre Dame sideline as the Irish looked to keep the Orange off the scoreboard. A shutout would mark their first since the 31-0 rout of Michigan in 2014, and the first at a neutral site since a 22-0 win over Maryland at Giants Stadium in New Jersey in 2002.

Embarking on an 18-play drive that consumed 6 minutes and 30 seconds, Syracuse marched to the Notre Dame 5-yard line. Kicker Andre Szmyt lined up for a 23-yard field goal amidst a deafening chorus of boos, which became praise moments later when Szmyt’s effort boomed off the left upright to keep the shutout intact.

After Williams’ 32-yard run for the Irish’s final touchdown, Syracuse’s last possession was shorter but more successful than its predecessor. With 10 seconds remaining in regulation, Szmyt redeemed himself by converting on a 29-yard field goal to cap an 11-play drive. The kick gave the Orange their only points in a 36-3 Notre Dame win that moved the Irish to 11-0.

“Defensively, I thought the plan was outstanding. We executed it flawlessly,” Kelly said. “We were able to do some things offensively that put us in a really good position and never really felt like the game was threatened at any time.“So when you go on the road in November, you beat the 12th- ranked team in the country, I feel really good about the win.”

The win — fueled by suffocating defense and consistent offense — was a complete team effort. With excitement already sky-high thanks to the still- undefeated season, one final road trip against 5-6 USC remained for the Irish, with a perfect regular season and a College Football Playoff berth in sight.