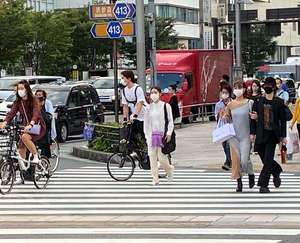 As the lights of my beloved city of Tokyo grew dim beneath my airplane flying to the vast land of the United States, I could not help but sense that my safety was being stripped away. Having lived in the collectivistic society that is Japan since I was three years old, I was taught to respect the community and preserve my place within it above anything else. Flying to a more individualistic society amidst a global pandemic — when prioritising communal health rather than individual desires becomes vital — was a troubling thought; I was concerned, too, that many Americans were new to the practice of mask-wearing.

At a young age, I became sensitive to how I affected my surroundings and wanted to be anything but “othered.” The Japanese culture ensured compliance through silent stares and raised eyebrows, where anyone the least bit socially aware would feel a strong sense of shame for disrupting the order that others did their part to maintain. Anyone who did not obey or understand these unspoken social rules were seen as a gaijin (foreigner) and were looked down upon as careless and uncultured.

On the flip side, a culture of “fitting in” had substantial benefits: quiet train rides, litterless streets and masked communities during flu season. It’s completely normal to wear face masks whenever you feel sick to avoid disturbing or endangering the community.

Having visited the U.S. every summer, I am familiar with the country’s great emphasis on freedom. You have the privilege to focus on your own thoughts and wants. Although there is a beauty to such individualism, it can be dangerous in other contexts, like the COVID-19 outbreak.

Before coming here, I was very aware of the objections some Americans have raised when asked to simply wear a piece of cloth on their faces. It’s been hard for me, however, to take these frustrations seriously because, growing up in Japan, I have long been expected to undergo minor inconveniences for the prosperity of the collective. When I was walking around University Park Mall for the first time, it absolutely shocked me that there were actually groups of people roaming the building without anything covering their mouths or noses. It felt like I had come face to face with the Big Foot of the pandemic, the notorious, dangerous boogeyman I had heard of, but never seen with my bare eyes.

At that moment, it hit me that COVID-19 cases are skyrocketing here simply because some believe it’s too much to ask that they mask up in public settings. It made me wonder, if freedom is so indispensable here, why were people willing to strip away the freedom of, say, the immunocompromised to shop safely? It also made me wonder if the United States is simply lacking what Japan has cultivated: positive peer pressure to care for others.

As an American, I think that a culture shift is vital for fighting this pandemic, and I acknowledge where our individualistic culture falls short. A culture shift would demand us to fight, united, against this pandemic to minimize active cases and protect our most vulnerable community members.