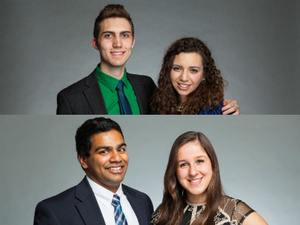 Each year Scholastic profiles the candidates for president and vice-president of Student Government. This year has two tickets that focus on many different aspects of student life. Read below for Scholastic's coverage of the two tickets, or read our endorsement here. 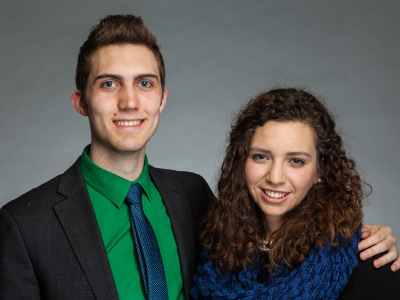 Juniors Bryan Ricketts and Nidia Ruelas want to bring passion to student government. During their time at Notre Dame, the pair have found value in promoting the passions of every student. They hope to foster this sort of growth as student body president and vice president.

“When you’ve got something that you’re passionate about, something you want to grow, student government should be a place to do that,” Ricketts says. “It’s not just a programming body, it’s a place for policy and programming that mesh together to meet the students’ needs.”

Ricketts, a chemical engineering and political science double-major, serves as president of PrismND and a peer educator for the Gender Relations Center. His experiences with PrismND taught him what it meant to lead.

“I came to campus in the fall of 2012, when 4 to 5 [the movement that spawned PrismND] was still in full force, and I came as a newly-out gay man, and was trying to find my place on campus,” Ricketts says. “I found that movement as well as certain underground groups that still existed at the time. They really showed me how to take in a person, respect them for who they were, help them get where they were trying to go, figure out their identity and give them that space to grow. I think that taught me … what [it] meant to be a leader on campus.”

Ricketts’s experience has equipped him with a wide variety of skills that he believes would make him a successful leader of the student body. With PrismND, he has served in an administrative fashion, planning meetings and organizing events, and in an advisory role, working with university officials to make sure the needs of LGBTQ students are met. He has worked with groups including the athletic department, Student Activities Office and Student Affairs.

As a team, Ricketts and Ruelas feel their unique, individual experiences make them a strong complement to one another.

“We share the same visions but we came from very different parts of campus,” Ricketts says. “... We complement each other well based on what we have done on campus.”

The pair hopes to provide resources for students that come from less-privileged backgrounds.

“One of the big resources that we’d like to see more of is the centralization of funding and resources for people who come from a low socioeconomic status,” Ruelas says.

She also points to a need for a mentorship program for these students, helping them acclimate to the potentially unfamiliar Notre Dame environment.

“I know for me, as a first-generation [college] student, this was something that I didn’t know,” she says. “The costs of loans, the costs of books, things that sometimes are ‘hidden,’ so to speak … Just expanding on these kinds of resources and having a panel where you can openly discuss these things.”

Building on the successes of outgoing leaders Lauren Vidal and Matthew Devine, Ricketts and Ruelas hope to continue the “It’s On Us” campaign. The program aims to change views toward sexual assault, and create an environment that protects students from sexual violence.

Ricketts and Ruelas also hope to implement an online forum that will allow greater transparency between students and administration. They hope the platform would allow students to address university officials directly regarding issues that confuse or distress them.

“What’s really crucial is having the administrators on there as well, so it could really be a collaborative space,” Ricketts says. “It could be something like a big picture issue, like Campus Crossroads, to, ‘we don’t have enough [power] outlets in LaFun.’ … Whatever kind of connection needs to be made, we can make it there.”

Above all, Ricketts and Ruelas hope to listen to the voices of Notre Dame students and provide opportunities for them to succeed.

“We truly are interested in knowing and hearing what other students have to say and really working with them to empower them and to hopefully inspire in them this kind of investment in student government and everything that they do,” Ruelas says. 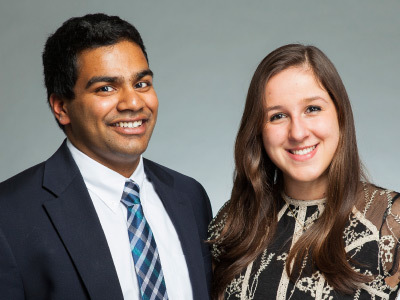 For student body president hopeful sophomore Neil Joseph and running mate sophomore Noemi Ventilla, it is all about the conversation.

“We consider [our platform] very oriented toward students and impacting the way student life is on campus,” Joseph, a political science and economics double-major, says. “… The first [thing we want to address] is communication between the administration, the student government and the student body.”

Joseph and Ventilla feel that the administration and the student body need to be involved in a continuous dialogue. From the changing of the print quota, to the elimination of the PE requirement, to Campus Crossroads, students feel as if they are being left out of the conversation, the candidates note. The sophomore partners vow to improve these communication channels, provide information up front and ensure that the administration understands the needs of the student body.

“While there is pushback with the administration, we’ve been really good about finding creative ways to bring them into the conversation, where they don’t feel like this is a [revolt] or anything like that, while also pushing for changes that need to be done,” Ventilla, a political science major, says.

One way Joseph and Ventilla aim to understand the needs of their potential constituents is to continue the trend of hosting office hours open to all students, a practice started with former leaders Alex Coccia and Nancy Joyce in 2013 and continued through the current administration. From talks with current students, the pair already has plans to institute a hot meal option at Grab and Go, update the DARTing system and expand student access to CIF reviews.

Another aspect of previous regimes that the prospective candidates will look to continue is the fight against sexual violence at Notre Dame. The “One is Too Many” campaign sponsored by Coccia and Joyce and the “It’s On Us” campaign recently released by the Lauren Vidal and Matt Devine administration will set the stage for the candidates’ future awareness and prevention campaigns.

Additionally, Joseph and Ventilla will look to expand the reach of campus security beyond the campus grounds to ensure these goals are met. They aim to work with local law enforcement to expand the area in which security forces can protect and serve both on and off-campus students.

“It’s completely illogical to only inform students of things happening [on or] close to campus when people do live off campus,” Ventilla says. “The seniors are an important part of the campus, even though they don’t live here anymore.”

The duo feels as if their experience thus far will serve them well in their new role, if elected. While a year younger than their competitors, Joseph and Ventilla have substantial experience. Both served on Freshman Class Council and as executive members of Sophomore Class Council. In her work as class president, Ventilla has been exposed to the functions of Student Senate, while Joseph has been a member of the financial management board while serving as class treasurer this year. Ventilla believes that these positions have “allowed [them] to branch out of the Class Council’s jobs,” leading to expanded experience with varying groups.

The pair says that this policy experience, along with the programming experience they gained planning events in their work with Class Council make them ideal candidates. Getting students involved is something they have worked on over the past few years, whether it is increasing attendance for a campus-wide dance or providing study abroad information sessions to interested sophomores. They believe that this involvement will be crucial to the success of their time in office.

“That’s our main goal — getting students involved so that they can really impact their own college experience and better their own university,” Joseph says.

The team says that their ideas did not just appear out of thin air, but have stemmed from conversations with students as well as faculty and administration. They think these tangible and student-focused ideas will provide the backbone for their administrative success.

“We do have some ambitious [ideas], but at the same time we have had some [ideas] that the administration has been very responsive to, and students have been really passionate and excited about,” Joseph says.

Read the Scholastic staff's endorsement next.