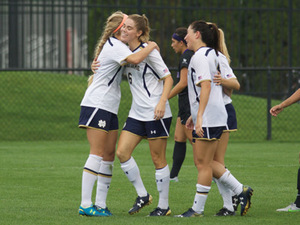 HUGS AND SMILES A 14 win season was filled with many accomplishments for the Irish.

A 14-5-1, 6-4-0 ACC record signifies a season in which the Fighting Irish women’s soccer team attacked adversity and emerged as one of the conference’s top teams.

Notre Dame outshot UConn 6-4, led the match in corner kicks 9-1 and kept the Huskies from shooting for 45 minutes. Yet UConn scored twice in the second half to close the 2015 season.

The Irish dominated in the first round, defeating Oakland in Alumni Stadium 5-0. “Even though we did not win the national championship this year, I would not want to play on any other team,” senior captain Cari Roccaro says.

Team chemistry and a strong defense headlined the season. “It was a total team effort from top to bottom preventing teams from getting opportunities,” Roccaro says. “Everyone was all in for the team and was always putting the team first.”

“We kept the other team in the game for too long when we should have put them away earlier and kept the lead,” Roccaro says. “We had to figure out how to respond… which taught us an early lesson about adversity.”

The Irish responded with three Big Ten wins, upsetting Michigan State, Indiana and Michigan each 2-0.  Then, the Irish suffered their first loss against No. 11 Clemson in double overtime 1-0. Notre Dame outshot the Tigers 15-13.

“We were UVA’s only loss this whole season,” Roccaro says. “That game was a confidence builder, and just made everyone feel so proud of the work we put in to win that game.”

Following the Virginia victory, Notre Dame lost consecutively to No. 3 Florida State 1-0 and Miami 1-0. Notre Dame outshot Miami 16-6, 6-3 in shots on goal, yet could not find its way past Miami defense.

The Irish ended the regular season with a 3-0 win at home against No. 5 Virgina Tech. “It gave us confidence going into the playoffs,” Roccaro says.  “It was a total team performance, and it was a great last regular season home game for the seniors.”

Despite losses, the Irish maintained a single digit margin in each defeat, the highest opposing score 2-1 against UNC. The team battled three double overtime games, and all four regular season losses were to ACC competitors.

“Playing in the ACC is not easy, but it is also a privilege because we are exposed to the best competition there is in college soccer,” Roccaro says. “Whether we won or lost, we moved on quickly to prepare for the next one.”

Gilbertson led in season goals, totaling 29 points from 110 shots on goal. “She had her best season, and has given the underclassmen some shoes to fill,” Rocarro says.

The graduating class boasts a 57-26-6 record, but their young teammates dribble right at their heels. “This team has great underclassmen. They all work so hard, and they work to make everyone around them better,” Roccaro says.

Freshman forward Natalie Jacobs had 52 shots on goal for a total of 13 points this season, second only to Gilbertson. Sophomore Sabrina Flores falls right behind Jacobs with a .073 shot percentage.

Notre Dame’s commitment to success continues in the post-season. Roccaro and Naughton were named Academic All-Americans, the first women’s soccer players to earn the award in the same season since Brittany Bock and Elise Weber in 2009.

And on Nov. 25, Flores and Jacobs were named defenders to the United States U-20 Women’s National Team. Sophomore Monica Flores again played in the eight-nation championship for the Mexican National Team.

Notre Dame’s record masks a season of close games and a close team. “It was really fun to be a part of such a close group that could laugh off the field but compete on the field,” Roccaro says. “It is an honor to represent the Irish.”