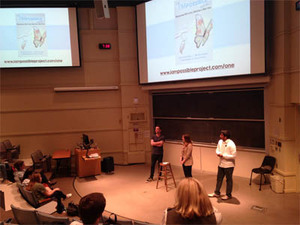 In 2009, Josh Rivedal heard what no one ever expects to hear their mother say.

“I got some bad news. They found your father in his room this morning, he took something and um, he killed himself. I’m so sorry.”

The audience of DeBartolo 142 gazed in silence as its members listened to Josh Rivedal tell his family’s story.

It has been a long road that led Rivedal from hearing those words for the first time in his New York apartment to speaking to members of the Notre Dame community.

An angry and distraught son, Rivedal buried his father and vowed he would break the cycle. He would not meet the same fates of his father and grandfather before him.

Yet 18 months later, Josh Rivedal found himself on the ledge of a fourth floor window.

Today, Rivedal continues to fight. “I never realized how hard it would be to keep that promise,” he says.

In 2011, he launched the I’m Possible Project in order to share his story and to spread awareness about suicide prevention, mental health and social change.

Since then, Rivedal has visited South Bend twice to tell his story through a one-man, Broadway-style performance.

Student government, especially this year’s Ricketts-Ruelas administration, has taken a special interest in mental health and wellness, creating a brand new Health and Wellness Department to accompany the new McDonald Center for Student Well-Being on campus.

When Josh Rivedal approached Notre Dame about returning to campus, student government jumped at the chance.

Sophomore Rohit Fonseca served as the first director of Health and Wellness this past term and planned the Josh Rivedal event on March 29.

“If I told you there was something affecting one out of every three students on campus, you would want to know what that is,” Fonseca says.

Fonseca and the Health and Wellness Department not only hosted Josh’s one-man performance, but facilitated a conversation about mental health afterwards. The panel included a representative from the McDonald Center, also known as McWell.

“While Josh spoke mostly about his own struggles with mental illness,” Conrad says, “he also spent time during the Q&A highlighting the ‘upstream’ factors that contribute to his own mental well-being — the health promoting, protective influences in his own life, which was exciting to hear.”

The McDonald Center provides a variety of services, programs and educational opportunities for students to expand their mental wellbeing.

“In order for students to thrive and flourish on campus, they have to be well,” Conrad says.

Mental health issues are something many people deal with, especially while facing the turbulence of college.

“We don’t know. People in that room could have been on the verge of suicide before that talk,” Fonseca says. “Just because someone put on a smile and walked out of their dorm room doesn’t mean everything’s fine.”

Once we appreciate that everyone has a story to tell, then the conversation can get started.

Rivedal closed the night by saying, “If this helps just one person, it was worth it.”