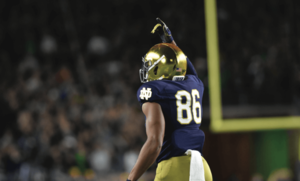 Leprechauns became lumberjacks on Sept. 29 when No. 8 Notre Dame defeated No. 7 Stanford for the first time in three years, emerging as a serious playoff contender in the process.

Going into the game, both teams boasted impressive 4-0 starts to their respective seasons and, for the first time in their rivalry history, both teams were ranked in the top 10.

Notre Dame’s lineup had seen several shifts since the beginning of the 2018 season. Junior quarterback Ian Book started for the Irish — his first time doing so at home and just this third time in his collegiate career. Senior running back Dexter Williams returned to play after missing the first four games of the seasons for a violation of team rules.

The Irish started the game with a 65-yard kickoff from sophomore kicker Jonathan Doerer. Neither team scored until Williams broke away with 8:13 left in the first quarter, running 45 yards on his first carry of the season to score the first touchdown of the game.

Stanford answered quickly, scoring a touchdown on its next possession when running back Bryce Love ran 39 yards to the end zone.

Less than five minutes later, Book threw the first of his four touchdown passes to graduate student tight end Nic Weishar and brought the Irish back into the lead.

Once again, Stanford responded with a touchdown of their own, tying the game.

Book threw another touchdown pass to Chase Claypool with just seconds remaining in the second quarter, and Notre Dame went into the locker room with a lead that Stanford proved unable to surpass.

For a team typically better in the first half of play, pulling ahead and gaining momentum in the fourth quarter seemed unlikely. But that’s just what Notre Dame did.

“We just knew it was going to go to four quarters, like it does every year, and that’s something we prepared for in our process throughout the week,” Book said after the game.

Early in the fourth quarter, Love was forced to leave the game due to an ankle injury. This left Stanford without one of their key players, and Notre Dame’s momentum did not falter.

With less than 10 minutes left in the game, Book threw a touchdown pass to senior wide receiver Miles Boykin. Boykin contributed nearly 150 yards of offense, including his touchdown.

On the touchdown pass to Boykin, Book said: “It’s just the read, you know. Our chemistry’s coming along and he’s such a good player and I love throwing to him.”

After the game, head coach Brian Kelly explained the team’s mindset to ESPN’s Scott Van Pelt: “The emphasis of all week was to finish off, and we dominated the second half of this football game against a really good football team. As a head coach you want to see your team finish a game, and we finished that tonight.”

With over 500 total yards of offense play during the game, Notre Dame more than doubled Stanford’s 229 yards. The Irish took home the Legends Trophy, leading Stanford in the series with a 20-13 record.

Notre Dame’s win over such a highly ranked team not only provided a victory over one of its storied rivals, but the 5-0 record also opened the door for a potential place in the playoffs.

“It was an awesome feeling,” Book said. “I’ll never forget this night. Our defense played so well and gave us so many opportunities, and the 10 other guys on the offense made this possible. It’s a night I’ll never forget.”