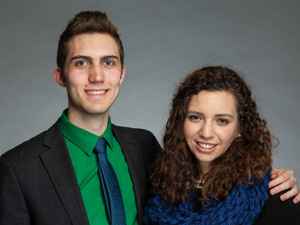 After getting to know both sets of candidates for student body president and vice president, the Scholastic staff quickly concluded that both tickets felt passionate about improving the lives of students and making concrete changes to the university culture and systems.

Through some lengthy deliberation and an examination of the candidates’ platforms, however, Scholastic has chosen to endorse Ricketts-Ruelas.

Both tickets share many similar ideas, but we believe Ricketts-Ruelas have differentiated themselves with their specificity and their experience with and focus on underrepresented students.

Both candidates feel that Freshman Orientation needs to be continuously revamped. Ricketts-Ruelas, however, offered a clearer path to change. They’ve recommended a more selective and defined Frosh-O staff application process, as well as developing programs tailored to the specific identities of freshman students.

Ricketts-Ruelas hope to address sexual assault by continuing the message of the “It’s On Us” campaign begun by Lauren Vidal and Matthew Devine, an idea shared by their opponents, Joseph-Ventilla. They’ve added to their platform, however, an active bystander intervention campaign during the first six weeks of school, the period during which students are most at risk.

Ricketts-Ruelas’ expanded focus on sexual assault is both needed and timely.  Notre Dame is expected to be featured prominently in “The Hunting Ground,” a documentary examining the nation-wide issue of sexual assault on college campuses, which is set to be released this spring. The release will likely bring greater interest in the way Notre Dame is responding to the national problem.

The Ricketts-Ruelas ticket also places heavy emphasis on students from lower socioeconomic backgrounds. As a first generation student, Ruelas seems especially attuned to concerns like the hidden costs of attending college. Their platform asks the university to acknowledge that some students stay on campus over break for economic reasons and to keep one dining hall open for fall and spring break, under limited meal hours.  They also hope to hold a discussion panel to reveal hidden costs of attendance, like books or travel, and spark a conversation towards addressing these challenges.

Ricketts-Ruelas plan to establish a short-term host family housing program for international students who cannot return home over breaks. The idea seems simple, achievable and useful for students, especially over short breaks like Thanksgiving and Easter.

Both Ricketts-Ruelas and Joseph-Ventilla feel that communication with off-campus students can be improved, and that off-campus students should be notified of important events. They also each mentioned a desire to create better ways to develop leaders and transition leadership within student government.

Ricketts-Ruelas again stood out with their suggestion of celebrating dorm culture on campus through “Dorm Week.” During the week, dorm specific products such as apparel would be released in places like the bookstore. The week’s goal would be to raise funds from dorm alumni that can strengthen dorm life and programming.

The Joseph-Ventilla ticket was strongest when it came to their suggested changes for dining and DARTing reform. They suggested a hot Grab and Go option for students, which has been instituted at St. Mary’s.

Joseph-Ventilla also want to see the “Quad Markets” started by Vidal and Devine expand to include campus and off-campus organizations, creating a kind of “bazaar” or place where students could go to learn about a variety of businesses and organizations. The markets would allow organizations another chance to reach out to students, other than the annual Activities Night.

We appreciated Joseph-Ventilla’s recommendation of making course syllabi available to students before DARTing, as well.

Joseph and Ventilla clearly have great chemistry working together from their roles as executive members of Sophomore Class Council, and they bring great energy to their ideas.

Overall, though, we felt Ricketts and Ruelas offered more tangible changes that will benefit students, especially those that are underrepresented on campus.  Ricketts’ experience leading PrismND, as well as Ruelas’ in Campus Ministry and Multicultural Student Programs and Services have made them especially attuned to a wide variety of student voices at Notre Dame.

At Scholastic, we believe Ricketts and Ruelas have ideas that can legitimately improve the experiences of students on campus and that they have the resolve and experience to make them happen.