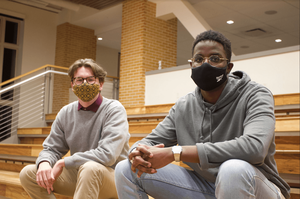 Though the 2021 student body election is proceeding in much the same way as elections of the past, the impact of the pandemic is still apparent. This year, those who petitioned to be on the ballot had to collect the required 700 signatures online rather than through the traditional approach, which generally consisted of aspiring candidates seeking out students in person at the dining halls or in the student centers.

The transition to an online format posed an obstacle for some tickets, and the judicial council even granted an extension of the signature collection deadline for two tickets who asked for it. This more arduous process resulted in only three tickets making the ballot, as opposed to the whopping six that made it last year, and a notable absence in the lineup: the freshman Zahm ticket.

Regardless of how different this year’s campaign process was, three tickets, each of which presented different strengths and was qualified in its own way, emerged. Among them, however, Allan Njomo and Matthew Bisner stood out to the Scholastic staff as the best choice to serve the student body for their comprehensive platform, demonstrated understanding of student needs and background in student government.

Njomo and Bisner boast a combined five years of experience in student government, giving us confidence that they will know how to navigate the structures of the student union so as to hit the ground running should they be elected. Njomo and Bisner have also worked hard to ensure that their platform represents the explicit needs of student groups on campus, with whom they have been meeting since winter break.

Their platform is by far the most expansive and detailed of the three tickets. Although this raised some concerns about feasibility, Njomo and Bisner were clear that their platform was balanced by encompassing two types of goals: those that were more concrete and realistic to work toward throughout a one-year term, and those that would focus on preparing the way and setting the tone for future conversations that could happen even when they weren’t in office. This reasonable outlook saves Njomo and Bisner from coming across as impractical.

Max Siegel and Zachary Holland, both of whom have never held any positions within student government, are a polar opposite ticket to Njomo-Bisner in terms of experience. The outsiders would be able to bring a fresh perspective to a student government that some frustrated students view as stagnant, and Scholastic loves their motivation for running: a desire to bring together the Notre Dame community in what they hope will be a post-pandemic world next semester.

Overall, though, Siegel and Holland’s platform seems underdeveloped. It contains many broad goals, such as a desire to “protect, advocate for and provide opportunities for Black, immigrant, Native American and LGBTQ+ communities” or “reduce secondary costs associated with school.” These targets are admirable, but when pressed for details on how they might approach these objectives, Sigel and Holland’s answers weren’t always satisfactorily specific. This ambiguity might be a byproduct of the unique approach the ticket is taking to building their platform. Siegel and Holland explained that they hope to develop further plans after speaking with students about the points they’ve already published. Although this outreach approach is a commendable way to keep their platform flexible, Scholastic believes the ticket could have benefited from starting these conversations earlier.

Mabry Webb and Jacob Calpey offer a pragmatic ticket. Their platform covers several critical areas without being excessively ambitious, and Scholastic admires that they are realistic about what will be feasible to achieve during a year in office. Webb and Calpey also emphasized that their agenda must remain adaptable during the pandemic. They know that if next year is anything like this one, they will have to make many adjustments to their original plans.

The Webb-Calpey platform’s prioritization of student mental health care, especially in the face of the pandemic, is its greatest strength. Webb and Calpey commit to establishing a system for reintegrating students into life on campus after a mental health crisis and reallocating resources to hire University Counseling Center therapists from different marginalized communities, among other initiatives. Webb and Calpey’s platform also offered the most innovative approach to transparency among the three tickets. They promise to allow student groups to schedule for one or both of them to attend their meetings, reasoning that being accessible to students in their own spaces will help facilitate better communications between student government and the student body. The other tickets should take note of this strategy.

Scholastic believes that, in a period so uncertain, Notre Dame needs a student body president and vice president who will be ready to jump into their roles and handle the unexpected. Njomo and Bisner’s experience in the student union coupled with their willingness to work with students from the ground up makes them the best choice for dependable forward progress.