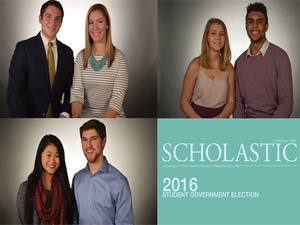 As Scholastic interviewed and evaluated each ticket to decide which one we believe is most qualified for the role of student government president and vice president, we realized that each ticket was very distinct from the others in its focus and ideas.

The Alberigi-Cha ticket prides itself on addressing issues related to mental health and providing resources to students who may be suffering from mental illnesses. Mental health is one of the most important issues on college campuses today. This ticket recognizes the importance of mental health and assisting students. The ticket’s devotion to serving Notre Dame students is admirable.

However, many of the ideas in the Alberigi-Cha ticket are not feasible in our estimation. There are many capital-intensive projects in the platform that just don’t seem easy to implement in a one-year term. Expanding counseling facilities may be necessary, but where does Notre Dame have extra space to just move an entire department to a building with greater capacity than its current location within the next year?

A 24/7, fully staffed animal therapy room with dogs and cats is probably the most unrealistic idea we heard throughout the candidate interview process. What student would be willing to take the night shift during school nights? Will these animals ever be able to live outside the therapy room? These questions were left unanswered. Finally, a sit down restaurant in LaFortune to replace Burger King isn’t practical. Due to LaFortune’s centrality and popularity, it would be difficult to segment seating to reserve for a restaurant on the main floor. Dining Hall dates would probably be the preferred option to a tightly packed, sit down restaurant.

The Robinson-Blais ticket is charismatic, fun and engaging. There is a huge wave of momentum and support related to Corey Robinson’s candidacy. His academic achievements, prominence as a Notre Dame football player and his relation to David Robinson, his father and a former NBA legend, are appealing. Blais has a vast wealth of student government experience and knows how to navigate within student government. There is no question that this ticket is the most accomplished of the group. Robinson and Blais are extremely active in terms of their involvement in campus activities and are diligent academically and in their extracurricular activities.

Robinson and Blais believe that innovation is the hallmark of their campaign. The “ThinkSpace” idea, which they say they would pattern after schools such as Stanford and Northwestern, could lead to groundbreaking intellectual developments by students. The ticket also proposes training St. Liam’s nurses to administer sexual assault “rape kits” as a further resource to help victims. The ticket does a great job carrying on the ideas and special interest activist groups from prior student government administrations but fails to specify timelines to complete projects. The agenda items also could be more specific. We can certainly understand the appeal of voting for the Robinson-Blais ticket, but we’d like to see more detailed action items that could help spur meaningful change on campus.

Therefore, Scholastic’s official endorsement for student government president and vice president in this election cycle is the Bertolotti-Fenton ticket. Dubbed “The Golden Ticket,” Bertolotti and Fenton have run a truly impressive campaign with many innovative, practical and feasible ideas that they say will occur during specific, explicitly stated time frames.

The bi-monthly newsletter is a great way to keep fans actively engaged in the affairs of student government. “Hey Day” is a creative idea to force students out of their comfort zones. Freshmen could really benefit from the idea, since they are typically students seeking to meet many more people. The updated professor review system differentiates itself from NDtoday because it would link directly to NOVO and include a broader list of professors. “Classy Nights” can help bridge the gap between professors and students and help form a true connection while allowing professors to present their passions. Student carpooling and taxi standardization would make travelling to and from campus more accessible to all students. This is just a small sample of the specific measures of the platform that would benefit students.

We understand the appeal of each ticket this year. While all have interesting ideas to contribute, we believe that the Bertolotti-Fenton ticket is the most prepared to handle the demands of leading the student body.