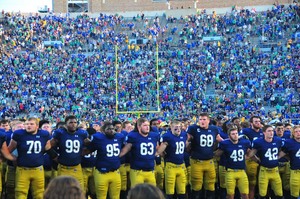 Offensive lineman Alex Bars had only made two starts in 2015 before his redshirt freshman season ended with an injury. This year, Bars moved from guard to tackle, where he started the entire season and helped anchor the offensive line.

The Holtzman: Notre Dame’s version of the Heisman for Most Outstanding Player. Redshirt sophomore quarterback DeShone Kizer accounted for 34 touchdowns in his final season at the helm of the Irish offense. He started every game and finished the season with 2,925 passing yards and 644 rushing yards. Despite his failure to lead the Irish to a winning season this fall, Kizer concluded a stellar career and will seek to join the ranks of NFL quarterbacks next season.

Junior linebacker Nyles Morgan led the struggling Irish defense with 94 total tackles. He will return to anchor the 2017 defensive unit with hopes to build upon his experience as the primary run-stopper.

Sophomore wide receiver Equanimeous St. Brown shined in his sophomore season as one of the brightest stars on a relatively bleak Irish offense, catching nine touchdowns and recording 961 receiving yards. Look for him to be one of quarterback Brandon Wimbush’s top targets next season.

Josh Anderson, a graduate student walk-on, received a scholarship last fall for being a model student-athlete as he “modeled” the 2015 Shamrock Series uniforms.

Wide receiver Kevin Stepherson amassed 462 yards on 25 receptions, starting three games and appearing in all 12. The shifty freshman averaged 18.5 yards per catch, the highest on the team.

Safety Devin Studstill appeared in every game this season and recorded one interception, returning it for 30 yards. He bolstered a depleted Irish secondary, proving himself to be a solid defensive back with real potential to lead next year’s unit.

Brandon Wimbush will have the opportunity to become the starting quarterback in 2017. Coming off a redshirt season, he will undoubtedly be the key to the team’s success.

Scott Daly, a fifth-year long-snapper, has appeared in every game from 2013 to 2016. The man has been a reliable presence in an otherwise shaky year for Irish special teams.

Junior Drue Tranquill returned from two consecutive seasons ended by ACL injury to become the defense’s second leading tackler. He energized the Irish secondary with strong support in both run and pass defense.