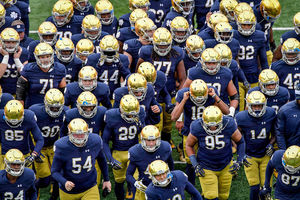 Is Jim Harbaugh blackmailing Mark Emmert? This is one of the few logical conclusions to take away from the NCAA’s arbitrary stringency in its decision to vacate the wins of the Notre Dame football program during its 2012 and 2013 seasons on the basis of academic misconduct. Call it coincidence that Notre Dame hosts the Michigan Wolverines to open the 2018 season, where a win would’ve vaulted the Irish (with a previous all-time winning percentage of .7288) to overtake Michigan (whose all-time winning percentage sits at .7291) for first in FBS win percentage. With the removal of 21 wins from that two-year stretch, Notre Dame is now a non-threat to the throne with its .7123 winning percentage, plunked down to sixth on the all-time list behind Michigan, Ohio State, Boise State, Oklahoma and Alabama. So, in addition to the khaki pants, does Harbaugh also wear the black hat in masterminding the NCAA’s sanctions against the boys from the bend? Put on your tinfoil hats, college football conspiracy theorists, because the truth of this matter is even stranger than that fiction.

First, the bad: In 2012 and 2013, a part-time student-athletic trainer wrote papers or “provided impermissible academic benefits” (i.e., cheated) for eight members of the football team. Now, the follow-up: When Notre Dame and head coach Brian Kelly found out about the academic misconduct in 2014, they self-reported the violations to the NCAA and handled the punishment through its honor code, Du Lac style. The academic credit that was not honestly earned by the players was stricken and five players were dismissed from the team, four of whom were also dismissed from the university. Eventually, the school allowed some of the athletes a second chance and two returned to the field. If in there you can find where the institution made a mistake worthy of slashing from the records the hard work of two teams of Irish players and personnel then congratulations, you might just be able to work for the NCAA.

In recalculating the grades of the athletes that returned to school, those players were retroactively playing during the 2012 and 2013 seasons with non-passing grades, or competing while ineligible, according to the NCAA. That makes about as much sense as self-reporting parietal violations. Notre Dame, by adhering to an honor code that prioritizes keeping athletes in school, invited the NCAA sanctions upon itself; if all the athletes involved were expelled without return, there would have been no retroactive ineligibility and no means for punishment. I’ve heard of the self-defeating nature of the Catholic tradition, but come on.

Perhaps no one is more upset with the NCAA’s decision right now than Rev. John I. Jenkins, C.S.C himself. In a letter following the Feb. 13 ruling by the NCAA’s Committee on Infractions to deny Notre Dame’s appeal of the vacated wins, Jenkins disproved any reasoning to which the NCAA clung. He pointed out that this is the first time in history that the NCAA has vacated wins in a case of student-on-student cheating. Without name-dropping a certain Chapel Hill school that had athletes taking fake classes for fake grades, Jenkins noted the inverted logic between how North Carolina’s academic autonomy was designed to be outside of the NCAA’s jurisdiction but Notre Dame’s apparently wasn’t.

In an effort not to sip from the wine of sour grapes, let’s examine the ruling from the NCAA’s perspective. The crux of their argument lies in that the student-trainer was a university employee and therefore a “representative of the university.” Here, Jenkins flips the NCAA’s argument on itself, by recalling that “in 2016, the member institutions of the NCAA amended the academic misconduct rules to make clear that students who serve in roles identical to that of the student in our case would not be considered institutional representatives.” Someone needs to remind this man of the fifth commandment because he’s murdering the NCAA.

In reality, the NCAA has proven that it is essentially playing Where’s Waldo with the targets of its sanctions. Louisville, in paying for strippers for recruits (who, of course, were getting paid themselves), Ole Miss, who allegedly had staffers fixing recruits’ ACT scores, and Notre Dame, for honoring its own honor code, just happen to be the latest victims. Pennsylvania State had 111 wins vacated in light of its child sex abuse scandal, only to have them restored two years later because Joe Paterno looks like everyone’s grandpa. UNC remains unscathed. So if you believe that the NCAA has any semblance of what it’s doing, then you definitely are able to work for the NCAA.