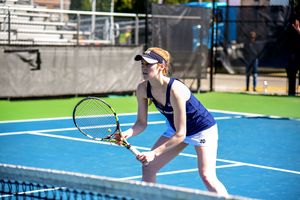 Following the retirement of women’s tennis head coach Jay Louderback, who led the Irish from an emergent program to one with 24 NCAA championship bids and 28 All-American honors, Notre Dame searched for a leader who would build upon his legacy. The Irish found one in Alison Silverio.

Silverio, a national champion from her playing career at Georgia Tech and the former head coach for the University of Oregon, debuted her Irish coaching career at the Big 5 Challenge last month, hosted by Texas Christian University. While at Oregon, Silverio led the Ducks to a legendary program turnaround, earning their first NCAA tournament appearance in 10 years and first NCAA tournament win in 14 years. Silverio brings that same passion to the Irish, and she is “committed to a relentless work ethic to enhance a student-athlete experience and a championship culture.”

As a player for Georgia Tech, Silverio grew with the developing program, leading the Yellow Jackets to the 2007 NCAA championship. When Silverio graduated with her degree in business, she was the program’s all time leader in doubles, winning 98 doubles matches at Georgia Tech, as well as ranking second in singles wins (107).

When offered the position, Silverio told UND.com that she “would love nothing more than to be the new head coach of the women’s program.”

“I have always revered Notre Dame. Growing up Catholic and in the Midwest, Notre Dame was where I always wanted to be,” she said. Silverio, alongside recently named assistant coach Courtney Scott, inherited a strong lineup, including returners Ally Bojczuk, Brooke Broda and Rachel Chong, as well as the successful doubles team of Cameron Corse and Zoe Spence. At the Big 5 Challenge, despite battling rain throughout the tournament, Corse and Spence both reached championship singles matches. The Irish posted an impressive 7-1 singles record on day two, including straight-set wins by Spence, Corse, Chong, Bess Waldram and Zoe Taylor.

Later this month, the Irish will compete at the ITA Midwest Regional Championships, hosted in Ann Arbor, Michigan, where the squad hopes to “get after it together.” The Irish will finish off their fall schedule with the Notre Dame Invitational on Nov. 2-4.

Silverio leads the Irish with her simple philosophy: “We’re going to improve with hard work, discipline and commitment. We’re going to be persistent everyday with the details. And continue to go about our business with character. I truly believe that character is going to win out in the tough times, whether it’s on the court, whether it’s in the classroom, whether it’s in our personal day-to-day lives.”