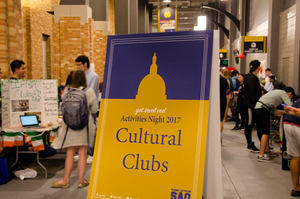 Notre Dame’s Student Activities Office hosted Activities Night 2017 on Aug. 29 in the Notre Dame Stadium concourse. An assembly of over 300 clubs specializing in areas as diverse as student government, business and media gave students a wide variety of options.

For first years like Mary Steurer, Activities Night was both exciting and overwhelming.

“People were coming in from the side and trying to grab us and bring us over to their little spot,” she said. “I guess that just shows they were enthusiastic about what they did. I liked the variety.”

Since she got there early, Steurer said that she did not have a problem with the crowd on her first trip through the concourse. She did, however, notice the crowds on her walk back through the booths.

“As soon as I turned around to go back up, it was like a salmon swimming upstream,” she said.

“It was a great opportunity to find new talent and people passionate about joining the club as well as an opportunity to encourage first years to consider opportunities they hadn’t previously considered,” he said of Activities Night.

In order to recruit students, Hayden stood in the crowd and asked for high-fives, a tactic that he thinks gained him extra sign-ups.

“It was really just a way for me to engage with people passing by so they didn’t walk by without actually considering the First Year Engineering Council,” he said. “I found out that when you were in the middle of the crowd and actually engaging with people, they were more interested in learning about the club than if they walked by and just read your sign.”