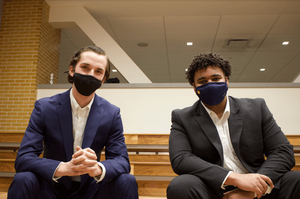 Juniors Max Siegel and Zach Holland aren’t your typical Zahm ticket: They’re juniors — not freshmen — and they’re serious about this campaign. And although they met each other in the infamous house, Siegel and Holland say they are opposites.

“That’s what makes our ticket so great. Together we can cover so much ground,” Siegel said.

Yet neither “initially planned to run,” he continued.

Though they lack student government experience compared to the other tickets,, it would be wrong to say both men have not been heavily involved on campus.

Siegel is an offensive lineman and sits on the Student-Athlete Advisory Council. Holland was a part of FUEL, First Undergraduate Experience in Leadership, his freshman year, the co-president of College Democrats last semester and is a member of Junior Class Council this year.

It wasn’t until Siegel became involved in “campus efforts for diversity,” during which he promoted voter and civic engagement and met with Provost Marie Lynn Miranda, Erin Hoffmann Harding and Rev. John I. Jenkins, C.S.C., that he realized he “wanted to have more of a push” and run for president.

Siegel believes being a student athlete has prepared him for the role, saying it “has forced me to appreciate what it really means to be a Notre Dame student and what it means to represent this university.” The prospect of being both a football player and president doesn’t phase him: “If anybody is thinking about my commitment issues, I think that they'd be surely mistaken,” he said.

In true VP fashion, Holland had Siegel’s back, emphasizing Siegel’s ability to manage both commitments: “I’m in awe of this guy. What he balances is absolutely incredible.”

Though Siegel and Holland would bring a unique outlook to office as the only ticket with the student-athlete perspective, they were aware of possible concerns over their ability to represent women. Siegel said they worked to address this by building a campaign team of “mostly women.”

Another way in which the Siegel-Holland ticket is distinct is their socially-driven, rather than policy-driven, platform.

Holland, in particular, wants to focus on facilitating the building of relationships that COVID-19 has broken down or prevented. “That’s really why I’m running,” he said.

The pandemic even impacted their petition process, according to Holland, which is why they didn’t release their platform until Feb. 17.

Their platform is also unique in the way they built it: rather than focus on input from various groups on campus before creating their points, Holland said that they are starting that process now that the platform has been formed.

“We'd be remiss if we were to put out a platform, and then say, ‘This is our platform, this is what we're running on. If you like it, you can endorse us, if you don't, too bad’” he said, discussing  their goal of staying flexible.

They also seek to create equitable funding for all clubs, increase multicultural spaces on campus, develop a program which teaches students about how to be an ally to students of color and “acknowledge we live on native land,” as Holland noted.

If elected, Siegel and Holland will promote sexual education and health as well, by working to provide birth control on campus. “Once we start talking about making condoms available,” Holland said, “we place emphasis on the fact that burden is on men as well as women to be responsible.”

When asked about his platform’s priorities, one point Siegel spoke of was “the perceived gap between student athletes and students.”

Another priority was Speak4America, which one of their team members started. Siegel described this as a program through which they would “have videos and open records of what people are requesting” so that their administration could be held accountable by the student body.

Siegel and Holland ended by acknowledging the loftiness of their goals, saying that these issues “need many years of working on.”  Yet Siegel believes their goal of starting “dialogue between people of all walks of life” is the best place to start.