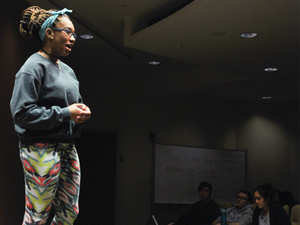 For five years, Show Some Skin has aimed to spark conversation about diversity across Notre Dame’s campus through monologues submitted anonymously by students.

This year’s annual student-run production will take place in the Annenberg Auditorium of the Snite Museum on Feb. 25 and 26 at 7 p.m. and Feb. 27 at 2 p.m. The show’s submissions focus on students’ individual experiences of inclusion and exclusion through personal storytelling and performance.

“Show Some Skin gives voice to unspoken stories about identity and difference,” Geraldine Mukumbi, executive producer of this year’s show, says. “Our production strives to be a catalyst for the campus community’s discovery and appreciation of Notre Dame’s true diversity.”

Show Some Skin highlighted issues of race and identity when it premiered in March 2012. The Race Monologues, as they were called, attracted full audiences for both opening performances. In the years since, the show’s scope has expanded to include issues such as gender, mental health and socioeconomic status.

“An interesting thing that has been happening lately is that we meet freshmen who know about the production even before setting foot on campus,” Mukumbi says. “More high school students are watching our videos on YouTube … We have been featured in publications such as The Huffington Post.”

This year’s theme is “Who Matters?” According to Mukumbi, it aims to “reflect on the ways in which, even when we do tell our stories, some individuals are silenced or invalidated. We wanted our university to reflect on the ways that our identities, stories and experiences are co-opted and taken out of context and the ways power complicates whose story gets told, how it’s told and if it is listened to.”

“The conversation does not end with the final monologue on Saturday afternoon,” Mukumbi says. “Show Some Skin is a year-long process and we hope that stories live on after the production is wrapped up.”