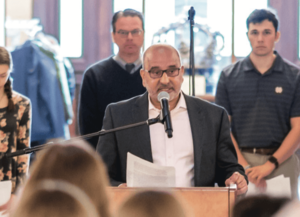 The Muslim Student Association’s annual Islam Awareness Week Dinner brought together students and faculty from a diverse array of faith communities on March 26.

As they shared their meal, Islamic Studies professor Dr. Mahan Mirza challenged attendees to contemplate the question: “What do Catholics and Muslims in America have in common?”

“They both breathe air and they both like Indian food,” he said. More importantly, though, Mirza reminded the group: “They both have an immigrant experience.”

Mirza and other leaders of the MSA invoked the shared experiences of Catholics and Muslims in the United States. Both communities have been treated as untrustworthy outsiders. “I think Catholics can probably sympathize with Muslims because of this, and Muslims can learn from Catholics to establish themselves in such wonderful ways,” he said.

In light of recent attacks on mosques in New Zealand and San Diego, members of Notre Dame’s Muslim community have struggled to reconcile their fears of violence with their hopes for unity.

Fridays are holy days in the Islamic faith, and every Friday Muslims on Notre Dame’s campus pray together in the interfaith prayer room in Jenkins-Nanovic Hall. Recently, they debated whether they should increase security measures for this prayer service and ultimately decided against the change.

“When you ramp up security, essentially the message that you’re sending is that there are members of our community that you’re afraid of,” sophomore MSA member Muhammad Abukar Mian said. “I think that’s very divisive. That’s not conducive to the sort of society that we want.”

Mian and other members of MSA hope that events like Islam Awareness Week Dinner will cultivate understanding between Muslim and non-Muslim community members alike.

The dinner exposed non-Muslim members to the cultural and religious experiences of the Muslim community. Attendees played a Muslim trivia game and enjoyed traditional foods.

As the dinner concluded, Mirza encouraged the group to remember the Muslim athletes, scientists, civil rights leaders and everyday citizens who have shaped American history.

“Muslims have been here since the very beginning and actually helped make America,” Mirza said.