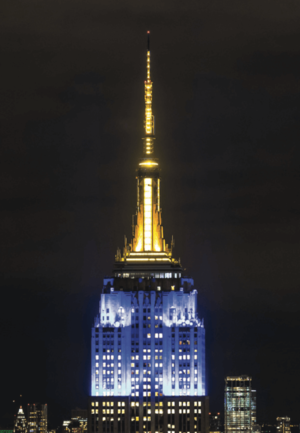 From Saint Patrick’s Cathedral to the “Today Show,” Rockefeller Center to the billboards at every subway stop, in New York City the weekend before Thanksgiving, you could barely walk three blocks without seeing Notre Dame in some way, shape, or form. Even the Empire State Building was blue and gold. Some online described it as the most obnoxious university doing the most obnoxious thing ever. Students on campus jealously asked one another if they were headed to the Syracuse game. The ninth annual Shamrock Series had officially arrived.

After skipping the tradition last season in order to show off the recently completed Campus Crossroads, Notre Dame hosted the series with renewed fervor. I walked into the Sheraton Hotel at Times Square, and the only comparison I could make was to Disney World. Athletic director Jack Swarbrick was checking in with the receptionist next to me. The grandiose pillars were wallpapered with an unidentifiable player wearing the contentious Yankee-inspired jerseys. A wall projection looped the same panorama shots of campus and financial aid videos that play on the video board during home games. Even my room key was blue and gold.

Notre Dame does theatrics well. This was no exception: the Shamrock Series boasted subway signs, faculty lectures, service opportunities and the band playing all over the city. The weekend was, in my opinion, worth the traffic, long lines, airport terminals and price tag it took to get there. Yankee Stadium was beautiful; the Irish entered at 10-0; a College Football Playoff game loomed on the horizon. For fans, it was the game to be at. For Notre Dame, it was the year to host.

Despite the praise from its attendants, the Shamrock Series is controversial. It is obnoxious; it does add (arguably) unnecessary travel to an already travel- filled season. The Irish tend to struggle at their next game, records show. Yes, with regard to the game itself, it is possibly worth reconsidering. Yet, having seen firsthand the community, spirit, and inspiration the weekend provides, I can say that the series is worth its hype. That initial comparison was right: the series is Disney World, just one with football jerseys instead of mouse ears.

Aside from the theatrics — and trust me, I love theatrics — I was most affected by the smaller moments during the weekend, the ones which were profoundly “Notre Dame.” When my brothers and I stumbled upon the drumline playing at Rockefeller Center, we watched the band students sing along together: a whole tradition of dancing and chants I had never seen. Seeing Notre Dame apparel on every block and offering a spirited “Go Irish!” as I passed. Leaving Yankee Stadium, the subway I was on got stuck. Trapped underground in that car, I saw band members, recent grads, older alumni, students I knew from class and little kids in blue and gold: a microcosm of the community I have come to call family. We sang the Victory March until the subway started again.

The Series is important not for the bravado, media coverage or even the football. The series provides a piece of home to that exact microcosm I saw on the subway. Yes, it brings in giving society members who go to every game. And students who skip class and drive all night to get there and talk about it for weeks, months and years to come. And alumni from the chosen area who maybe haven’t been to campus in years. And recent grads who take the opportunity to feel like students again. And the fans and the curious and those who only know Notre Dame from “Rudy,” who have never experienced Notre Dame for themselves. For just a weekend, the best of Notre Dame will come to you; that is the promise of the series.

The Shamrock Series is more than a football game or a marketing stunt. It is a moment of spirit at Rockefeller Center. A moment of camaraderie on a street corner. A subway car of strangers singing as one.