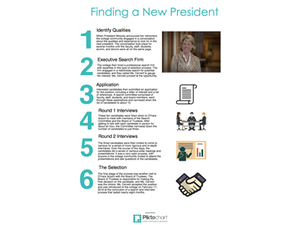 So spoke Sister Veronique Wiedower, president of the Sisters of the Holy Cross, shortly before handing the podium to Jan Cervelli amid a raucous standing ovation at Saint Mary’s College. Cervelli was introduced as the president‐elect of Saint Mary’s on Wednesday, February 17 before a zealous crowd of students, faculty, trustees, and alumni.

The Board of Trustees selected Cervelli in an eight‐month search and interview process that began when President Carol Ann Mooney announced her impending retirement. Cervelli, a South Bend native whose sister was a Saint Mary’s graduate of the class of 1972, will begin her term on June 1.

“It’s a great institution,” Cervelli said in an interview. “It’s a great opportunity to take it to the next level and to come home! It wasn’t a hard sell for me.”

“Landscape architecture is the kind of field that is really great for a college president because you definitely understand the teaching and research side of the university, but you also understand the campus physical ground, campus master planning, and all the facilities,” Cervelli said of her professional background.

“You can have great academic programs, but if your campus is not an attractive, safe, and wonderful place, nobody wants to be there. So they really go hand in hand.”

Beth Culligan is a member of the Board of Trustees and a graduate from Saint Mary’s in the class of 1972. She is convinced that Cervelli will be an excellent twelfth president for the college.

“The Board chose Jan because of her shared Holy Cross values, her sophisticated sense of building consensus, her strong commitment to shared governance, and her proven visionary leadership,” Culligan said.

Cervelli has a number of ambitious short‐term and long‐term goals for her presidency. She will quickly begin developing the Strategic Plan, including the academic degrees and practices the college can institute to attract exceptional students and become more nationally visible. She is also very attuned to the financial situation, and she will work diligently to deliver exceptional degrees while keeping tuition affordable.

Cervelli’s first priority, though, is building relationships with the students. “That’s what I’ve always been about in my career,” Cervelli said. “The level of enthusiasm and the quality of the students just blows me away. So that without a doubt is what I’m looking forward to the most.”

That kind of passion is exactly what has already made Cervelli so endearing to the Saint Mary’s community. If Cervelli can successfully achieve her goals, there will no doubt be many more standing ovations in her Saint Mary’s future.