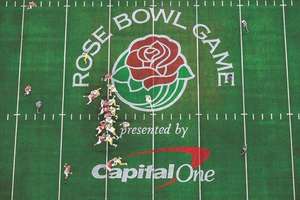 If there was a search for an image to encapsulate the talent gap between Alabama and Notre Dame, it would end with the picture of Crimson Tide running back Najee Harris hurdling cornerback Nick McCloud.

After the 31-14 loss in the relocated Rose Bowl on New Year’s Day, head coach Brian Kelly was adamant that the final score wasn’t an issue of talent but an issue of making plays — or failing to do so.

“This wasn’t a matter of getting knocked off the ball or not having enough players to compete against Alabama,” Kelly said.

But while Notre Dame failed to capitalize on multiple opportunities in Arlington, an Alabama team with three players who finished in the top five of Heisman Trophy voting clearly outmatched the Irish.

And Harris, who came in fifth in the Heisman ranks, blazed past Notre Dame defenders for 125 yards on 15 carries, which makes for an impressive average of 8.3 yards per carry. For perspective, Notre Dame running back Kyren Williams averaged 4 yards per carry in what was still considered a strong 64-yard, one touchdown performance.

“This was the Kyren Williams we had known to see for ten weeks during the season — caught the ball out of the backfield, he ran tough, he was physical, protected well,” Kelly said. “He was a complete back tonight.”

Kelly’s quarterback also had a good showing: Book was 27-of-39 passing for 229 yards with one interception, and he ran for 55 yards and a touchdown. But that interception proved costly and set up Alabama’s scoring drive to take a 28-7 lead in the third quarter.

Still, Kelly balked at the idea that the Rose Bowl was another example of Notre Dame coming up short on a big stage.

“I guess everybody needs to continue to carry this narrative that Notre Dame is not good enough,” Kelly said. “Look at the scores of the games that Alabama has played all year, and I think we need to start to change the narrative a little bit.”

Ten days later, Alabama strengthened Kelly’s case with a 52-24 beatdown of Ohio State in the national championship — quieting, if not quelling, talk that Notre Dame didn’t even belong in the playoff.

“We’re going to continue to battle, continue to recruit, and continue to put ourselves in this position to win a national championship,” Kelly said.

Since last facing Alabama in the BCS Championship following the 2012 season, Kelly’s program has tallied five 10-win seasons and made the College Football Playoff twice in the last three years. After this second appearance, Kelly reiterated that he sees winning a national title as an attainable goal.

While the Irish have closed that physicality gap, the eye test shows room for improvement. Alabama’s most extended scoring drive took less than 4 and a half minutes, a testament to the Crimson Tide’s explosive offense and affinity for big plays. Notre Dame’s approach was methodical — centered around the run game and clock management — with a few carefully calculated attempts downfield.

Alabama scored the first 14 points of the game on a pair of Mac Jones touchdown passes to DeVonta Smith and Jahleel Billingsley in the first quarter. Notre Dame got on the board four minutes into the second quarter on a 1-yard run by Kyren Williams. Less than three minutes later, Jones slung another touchdown pass to Smith, this one a 34-yard play to give Alabama a 21-7 lead at the half.

After a Book interception gave Alabama the ball back midway through the third quarter, Jones and Smith connected on a scoring play for the third time, taking a 28-7 lead. Early in the fourth, the Crimson Tide extended that lead to 31-7 on a 41-yard field goal from Will Reichard. Book found the end zone on a 1-yard run to narrow the final margin to 31-14 with under a minute left on the clock.