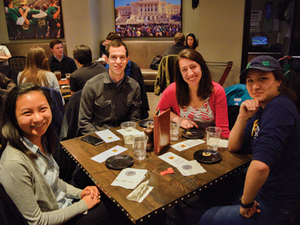 Rohr’s, the bar and grill inside the Morris Inn, hosted a student event called “Bites and Brews with Bell’s Brewery” on Feb. 17.  The event was publicized on Facebook and tickets were sold through the Morris Inn’s event website.

The event was sold out two days in advance and drew a large student crowd of nearly 60 students.  Bell’s Brewery, based in Kalamazoo, MI, brought in a selection of four seasonal beers: Two Hearted IPA, Amber, Consecrator Doppelbock and Double Cream Stout.  Each beer was served in a tasting glass alongside hors d’oeuvres prepared by the Rohr’s kitchen staff.  The food samples, each paired with a specific beer, included pork and duck tacos, braised short ribs, kraut fritters and chocolate mousse.  Afterwards, students were served a full pint of their choice of the four Bell’s beers.

“We were looking to do an event that brought the students in.  We thought everybody likes beer, so we talked to the Bell’s representative and set it up, and we thought a pairing would be great with food,” Rohr’s Beverage Manager Penny Stankeiwicz says.

Bites and Brews is one of a number of recent Wednesday night events Rohr’s has hosted this semester, marking an effort by management to attract more students.  While in past years it has not been a big student destination, that is beginning to change, Stankeiwicz says.

“We’re starting to see more and more students come in, and especially with our specials, we’re trying to look towards you guys more with our price range and food you like,” she says.