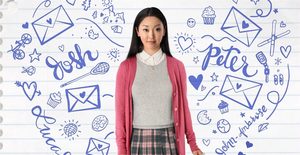 To All the Boys I’ve Loved Before

At first glance, TATBILB is a well-developed but cookie-cutter example of the kind of movie that is produced by on-demand content makers catering to teen consumers. Its characters are likeable, its writing is charming and it is full of iconic moments that essentially guarantee commercial success (that back-pocket spin? And that hot tub scene? The stuff Tumblr posts are made of!).

Despite the classic heartwarming moments, this movie is different from its predecessors in one very important way: its protagonist, Lara Jean, is Korean- American, and is portrayed by Lana Condor, an actress of Vietnamese heritage. While it seems to fit the pattern of a cheesy rom-com — there is a delightfully awkward heroine with a popular jock love interest, a wonderfully trite “fake-dating” premise, and even a love triangle thrown in — there is a significant difference in that the movie’s heroine breaks the typical rom-com mold. Seeing characters of color who aren’t relegated to side roles, but who are worthy of being the center of attention and the object of affection — it’s revolutionary. And beautiful.

Sitting down to eat breakfast in NDH at 9:30 a.m. on a Tuesday, one does not expect to hear “Bring Me to Life” by Evanescence blaring through the speakers. Immediately, everyone in the dining hall woke up. From that moment on I’ve come to realize and greatly appreciate the choice of music that NDH plays at all times of day. It is a huge struggle to fight the urge to sing along to pop songs from the early 2000s. You may even find yourself staying another five minutes just to listen to “Yeah!” by Usher. It is the sweetest of desserts, but I would not want to eat my meals in any other way. If you really want to enjoy these songs in the best way possible, snag a booth in the very back. Get comfortable because you may be staying awhile.

“Mamma Mia! Here We Go Again” is a bright and lighthearted remake of the first “Mamma Mia,” but it fell short of my (admittedly high) expectations. In this movie, viewers dive into the past and witness a young Donna’s journey to Greece and her whirlwind romances with Harry, Bill and Sam. The movie constantly draws exact parallels between the lives of Donna and Sophie which, while touching, quickly become tiresome and repetitive as the movie continues. The sequel repeats many of the classic musical numbers from the first movie which left me with a semi-disappointed feeling of “been there, done that.” The movie consists of several lackluster ballads and is missing much of the upbeat and exciting choreography that made the first movie so amazing. The movie’s saving graces include Cher (and her classic use of autotune), the talented Lily James, colorful vintage costumes and minimal singing roles given to Pierce Brosnan and Stellan Skarsgård. If you’re a “Mamma Mia” fan, I still would recommend this movie — just keep in mind that it’s nearly impossible to beat the original.

What happens when seven college friends who play a hodgepodge of instruments start jamming out? In the case of “Juice,” they start a band that goes on to tour the country, win awards and perform on “The Today Show.” The seven-piece band performed selections from their genre-defying oeuvre on Aug. 30 at Vegetable Buddies in downtown South Bend. The concert was part of a national tour to promote their new EP “Workin’ on Lovin’,” which hit Spotify this summer. Unless you attend one of their concerts, it can be hard to believe that gnarly guitar solos, Kanye-inspired rap verses and a violin blend well, but they fuse seamlessly when Juice hits the stage. While its music on Spotify is spectacular and worth a listen, Juice is a group that one needs to experience in concert to fully appreciate.

“The Third Murder” is the 12th feature film by writer, director and editor Hirokazu Kore-eda, whose career has spanned the last three decades. The plot follows lawyer Tomoaki Shigemori (Masaharu Fukuyama) as he defends a client
accused of murder. The client, Misumi (Kōji Yakusho), has been convicted of murder in the past and, despite facing the death penalty, pleads guilty. The twist? Shigemori is not totally convinced of Misumi’s guilt. Kore-eda’s film is slow but crisp and striking, exploring a world where lawyers play Sherlock and prison interrogations bleed poetry. The truth lies just out
of reach, always almost-tangible, as Shigemori explores the life and mind of Misumi and encounters the family of the victim. Kore-eda’s auteurship shines through in “The Third Murder,” a fascinating court drama that commands the viewer to question what is right, what is wrong and what is true.