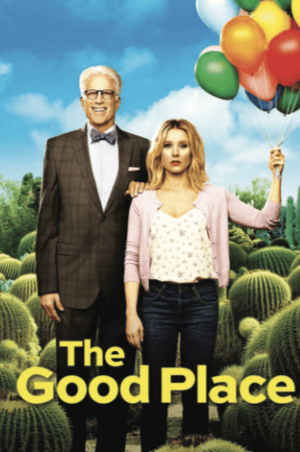 In September, the fourth and final season of the sitcom “The Good Place” began airing on NBC. The show follows Eleanor Shelstrop, a self-proclaimed “human trash bag” who has died and found herself in “the good place,” a heaven-like utopia for life after death. The catch? She’s not supposed to be there. To avoid being discovered as a fraud, she enlists the help of a professor of ethics and moral philosophy, Chidi Anagonye, to help her become a better person. It’s filled with hilarious one-liners and classic tropes spun on their heads. Every season ends in a cliffhanger, twisting the show in a direction the audience never expects. It’s fast-paced too, with most episodes running only 20 minutes long. With three seasons on Netflix, there’s plenty of binge-worthy material available. Aside from the lighthearted humor, the best part of the show is the bits of philosophy you pick up. As Chidi teaches Eleanor about Aristotelian ethics, Kantian deontology or the trolley problem, the audience learns about it too. And as the characters become better people, the show encourages its audience to do the same. “The Good Place” is so much more than your classic comedy: it teaches you how to reach the real good place and laugh while you do.

Serial killers. The FBI. Netflix. What more could you ask for in a television show? David Fincher’s “Mindhunter” returned to Netflix for a second season in August and picked up right where it left off, captivating viewers with thrilling and horrifying stories of disturbed killers. Set in the early 1980s, “Mindhunter” follows the FBI’s newly- founded behavioral science unit. Led by Holden Ford (Jonathan Groff), Bill Tench (Holy McCallany) and Wendy Carr (Anna Torv), the team travels around the country to interview convicted serial killers. The unit’s goal is to analyze their behavioral patterns in an effort to prevent future murders. Loosely based on John Douglas’ book, “Mindhunter: Inside the FBI’s Elite Serial Crime Unit,” the show weaves together historical characters with fictional storylines for a fascinating narrative. Viewers may recognize Charles Manson, Edmund Keeper (a.k.a. the “Co-ed Killer”) or Dennis Rader (a.k.a. the “BTK Strangler”), and can witness those characters’ fascinating conversations with Ford and Tench. The acting is on par with other elite crime drama, particularly McCallany’s portrayal of the gruff yet tortured Tench. The agents’ struggles to balance challenging and emotionally taxing work with their personal lives force us to empathize with them. What carries the show, however, is the writing. The conversations between the agents and serial killers are disturbing, but viewers can’t get enough of them. If you’re a fan of crime shows, “Mindhunter” is a must-watch.

Comprehending the complexity of Middle Eastern terrorism is difficult. Most authors struggle to do the information and history justice while keeping their writing accessible to readers who are not well-versed in the subject. In “Black Flags: The Rise of ISIS,” Joby Warrick, a Middle Eastern expert and journalist at the Washington Post, conveys the complex history of ISIS and its roots to the everyday reader with seeming ease. When I first picked up “Black Flags,” I had little knowledge of the roots or exploits of ISIS. My mind contained fragments of a very convoluted and incomplete story, which Warrick’s guide to today’s most feared terrorist group allowed me to piece together. The book follows the creation of ISIS — initially an off-shoot of Al-Qaeda, led by the notorious Osama bin Laden — under the obscure Abu Musab Al-Zarqawi and its evolution after his death. Warrick details the major terrorist attacks and activities of the late 20th and early 21st centuries and outlines their underlying causes. Following the life of Zarqawi, Warrick grapples with the causes of terrorism and details the unknown forces combatting it, such as the Mukhabarat, Jordan’s intelligence agency. With Warrick’s work as a guide, understanding the state of terrorism in the modern Middle East and its effects on the western world becomes attainable, even for an amateur.