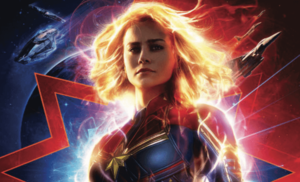 What it Takes To Be Super

The new superhero movie “Captain Marvel” shows the newest chapter in the Marvel narrative, detailing the story of Air Force pilot Carol Danvers. While audiences may have gone into the film expecting another sequence of big explosions, outer space fight scenes and Stan Lee cameos, they weren’t disappointed — but they were also given a portrayal of the new faces and perspectives our society has demanded from Hollywood.

America is becoming more socially aware, and the results of this are evident in previous superhero films, including “Wonder Woman” and “Black Panther.” “Captain Marvel” follows as the next installment in the reconstructed vision of what it takes to be “super,” and the impact of such films cannot be emphasized enough. Now, rising generations will be able to witness their life stories on the big screen, and they will know that society has heard the voices of those who came before them and demanded change.

From the white rabbits to the ominous red jumpsuits and the itsy-bitsy spider to 11:11, Jordan Peele’s latest horror film “Us” left viewers with plenty of symbols to piece together. The movie

follows a woman named Adelaide, who, as a child, had a terrifying encounter with her own reflection inside a house of mirrors. Years later, her family becomes haunted by four bloodthirsty figures, called the “Tethers,” who reveal themselves as doppelgangers of each family member. Ending with an unpredictable plot twist, “Us” raises several important themes about the duality of an individual, the history of racial and socioeconomic repression in the U.S. and the dangers of technology. The film is more than a simple thriller — while there was certainly no shortage of shrieks and laugh throughout the screening, it was clear from the silence during the final credits that the story made viewers question their own beliefs and values. The abundance of recurring symbols emphasized that each sound, light and prop decision was purposeful. Once again, Peele, director of the Oscar-winning “Get Out,” has masterminded a thought-provoking representation of a modern horror film.

S.O.S.! The Jonas Brothers came out with a new song, “Sucker,” that is still burnin’ up the charts. On top of that, they announced that the band is officially back together. Milestones,

such as marriage, kids and solo careers since we last saw them will likely impact their new music. It is also evident in the single’s cover art that there is a power shift in the group — Joe is stepping back and Nick is replacing him as the new frontman.

Though many things have changed, the brothers still exude a strong sense of family that continues to make people love them. Now that the Jonas Brothers have reunited, will we be seeing any other boy bands from our youth making a reappearance? Big Time Rush, we’re looking at you.

The Act,” a new Hulu series based on the murder of Dee Dee Blanchard, tells the story of Blanchard and her daughter as they adjust to life in their new Missouri neighborhood. Blanchard

(Patricia Arquette) cares for Gypsy Rose (Joey King), who uses a wheelchair and allegedly suffers from a variety of severe medical disorders. As the show progresses, however, the viewer learns that Gypsy’s “illnesses” might not be as serious as they seem. While Dee Dee claims Gypsy is paraplegic and allergic to sugar, we see Gypsy walk to the fridge for sugary late-night snacks. The viewer also learns that Dee Dee profits from her daughter’s “ailments,” using Gypsy to obtain fame, donations from unsuspecting well-wishers and even access to prescription drugs.

As the plot thickens, it becomes clear that Dee Dee has physically and emotionally coerced Gypsy into this lifestyle. Juxtaposing the horrors of Gypsy’s situation — brutal, unnecessary medical procedures, psychological manipulation and enforced isolation — with cheerful music and colorful settings, “The Act” grows steadily more disturbing as the episodes progress.

As of late March, only three episodes have been released. This show, brilliantly paced and visually entertaining, already seems like bingeable content. Anyone who enjoys true crime or medical dramas should check out “The Act.”