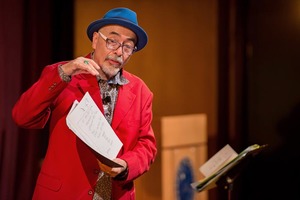 A man presents himself before an intimate crowd in the Decio Theatre at the DeBartolo Performing Arts Center. Dancing onto the stage, he is greeted by the moderate buzz of academic applause. He sports bright white pants, a red suede blazer and a blue fedora. He drips America, while his full white mustache and cappuccino skin radiate the warmth of a sharp Mexican sun. Juan Felipe Herrera, serving his second term as the Poet Laureate of the United States of America, stands at a podium. He expresses gratitude to the Institute for Latino Studies at the University of Notre Dame and Fr. Jenkins for welcoming him to such a vibrant and impressive university.

To begin, Juan Felipe draws out a small book filled with Post-its and handwritten scribbles. He reads a few poems of his own, some of which have never been published. He follows each recitation with a reflection on his creative process for that particular work. Herrera cites nature as an immense inspiration; one poem’s inception took place while he sat simply watching the river behind his Californian home flow into the horizon.

The son of immigrant farm laborers, Herrera was born into a culture that valued hard work, but was often neglected by the American social construct. Herrera’s negative experiences with wage legislation and the underbelly of corporate efficiency fuel much of his writing. His mission, which he repeated multiple times during the reading, is to reconcile the divide between people of different backgrounds and cultures in the melting pot of America, or as he says, “to bring people together.”

Prior to the event, students had the opportunity to submit their own work for Herrera to read. He elegantly interspersed some of their poetry amidst his own, emitting an aura of oneness that melded well with his strong platform of social reciprocity. Herrera read some of the poetry in Spanish and some in English, which established a beautiful blend of sounds and style. In the spirit of Herrera’s social goals, he attempted to establish an entirely new language without compromising any of the traits of the original two. During the question and answer session, a student asked Herrera in which language he prefers to compose his poetry: English or Spanish? “They are different,” he says. “When I want to relax I write in Spanish, but when I want to really get creative I write in English because it offers so many different sounds and words to choose from.”

Toward the end of the reading, Herrera played a game with the audience. He took his little poetry book and began flipping through it. He asked the audience to yell stop whenever they wished. After an audience member let out a loud “Stop!” Herrera’s thumb stopped on a page. He explained that where his thumb landed would be the starting and ending point. The poet then began reading a few lines of one work and then flipping to another, and another, and another. He was freestyling — making something brand new out of the old, taking something already understood and flipping it on its head. It was mesmerizing. Not only did Herrera’s game blend different poetry, it also blended different voices when Herrera got the audience involved, inviting them to repeat each line after he read it.

While normally an audience is tired and ready to go home following a lecture or presentation, Herrera managed to end his reading on a note even more vibrant than how he began. Herrera’s poetic genius was running rampant throughout the entire 90 minute lecture as he blended styles, voices and languages to convey the spirit of communion he values so highly. The audience’s participation was living poetry, combining unique voices and sounds to make an entirely new piece of art that allowed everyone to participate. Truly a man who lives through his work, Juan Felipe Herrera’s time at Notre Dame was an absolute gift, just as his poetry is to the world.