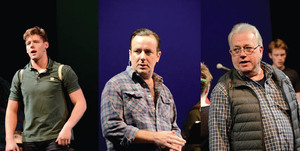 The curtain opens on a train headed to Columbia University where a coaching job awaits. Knute Rockne, the titular focus of “Rockne: The Muscial,” revisits his life in a series of flashbacks.

At Notre Dame, we know Rockne well. We nod at him before entering Notre Dame Stadium, and we rub his bust’s nose for good luck before training in his building. The Rock embodies Notre Dame football, and his legacy inspires the university.

But on Sunday, Nov. 20 in the DeBartolo Performing Arts Center, Chicago-based actors and the American Music Theatre Project at Northwestern University transformed the icon we know and love. In the play, the Rock is raw — behind the hero is a man battling faith and family. Before he became the star of the American football industry, Rockne was a walk-on college football player. He was a student who conducted chemistry experiments with Fr. Nieuwland.

And yes, it is a musical about football — an idea as risky as a Hail Mary pass. “Rockne,” however, catches it.

Seeing Notre Dame on stage is a unique experience for current and former students. Domers resonate with lyrics that capture the joys and pressures of living under the Golden Dome and poignant scenes at the Grotto. Jests about parietals and an exuberant chorus of “Beer, beer for old Notre Dame” also ring true with those familiar with the university.

But anyone can enjoy this musical.

Even though “Rockne” lacks a hit song (save for the Victory March), its music is innovative and embodies the musical’s central action. Rockne’s wife Bonnie laments their relationship in “If There Had Been Roses,” a ballad sung while Rockne coaches the Rose Bowl. “Sons of Notre Dame” echoes the sharp divide between Rockne’s relationship with his football “sons” and his biological son.

Buddy Farmer, a former football player himself, wrote the play “Coaches: Off the Bench with Knute, Vince and the Bear” before focusing on “Rockne.” Producer John Girardi, ’69 first saw a scene from “Coaches” at, fittingly, a USC-Notre Dame tailgate, and he was hooked.

It’s a team of exceptional talent. Director David Bell is also Director of Music Theatre at Northwestern. He brings direction expertise from Broadway and the Kennedy Center, among others. Composer Michael Mahler’s bright musical ability brought him to the Broadway revival of Miss Saigon. Together, Bell and Mahler wrote the lyrics.

In spring of 2008, “Rockne” ran in Munster, Ind. and was praised in multiple Chicago reviews. Then it sat.

Could “Rockne” be destined for a future spot on Broadway? It’s certainly possible, though it will not be anytime soon — the production team is first focused on attracting regional theaters to stage the show. The play’s guaranteed Notre Dame fan base and its exceptional unity of sport and song show promise.

But the beauty of the show is that it is not only about football. It is the story of a woman who defends family while her husband chases fame. It is about a father who abandons his own son to care for a son he chose. It is a story about friendship, leadership and falling in love.

It is a story about a game — the game of life.