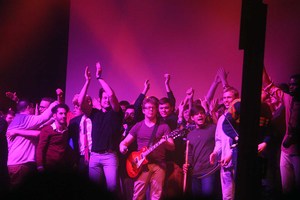 In a year of political and social divisiveness, the Knights of Keenan Hall sought to weave a theme of unity through their 41st annual Keenan Revue. In its attempt to make people laugh together, this year’s “State of the Revuenion” poked fun at the fragile nature of campus happenings, both big and small. No one was safe. President Trump, the Rev. John I. Jenkins, C.S.C., the lovely “Notre Dame Girls” and the overeager networkers of Mendoza, along with many others, all endured a thorough mocking.

Keenan’s longstanding dorm tradition has grown from a small gathering of residents in the hall basement to a largescale professional production. Today’s Keenan residents treat the Revue with that same level of commitment, taking the show so seriously that writers began working on a 2017 skit the Sunday after last year’s production.

“Granted, we didn’t keep up that pace throughout the year, but we’re always kind of continuously jotting down ideas and writing skits as the year goes on,” says John McDonough, a head writer of the 2017 Revue.

Of this year’s skits, McDonough’s favorite was “Drunk History,” a tale of one Keenan man’s night of revelry based on the Comedy Central show of the same name. McDonough was equally proud of the endless Matt Damon references that managed to find their way into the Revue.

“I’m still not that sure if it was that funny, but I’m proud of the fact that we actually pulled that off,” he says.

The show was filled with laughs, as always, but also featured the first female performer in the history of the Revue. Newlyweds rector Noel Terranova and first lady of Keenan Jaclyn Terranova shared their wedding vows on stage, sealing their commitment to each other with a drink of confiscated alcohol. Jokes attacked life at Notre Dame from all angles.

One skit told a strikingly familiar tale of campus love resembling “The Princess Bride.” After the audience controlled themselves at the sight of junior Matt Kobunski as “Buttercup” in the arms of his roommate Tyler “Athlete” Newsome, they only found themselves laughing harder at the parody of Notre Dame guys “broing” together and the professionalism of the “Doktors” of St. Liam’s.

Despite various comedic influences, McDonough pointed to one thing in particular as the show’s muse.

“More influential than any comedian we can watch, is simply the people around us,” he said. “Just taking the time to write down some of the funny stuff that happens with your friends goes a long way in making relatable, funny skits that connect with a Notre Dame audience.”