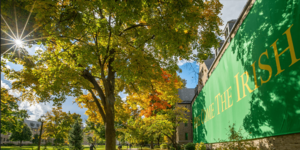 At Notre Dame football games, the student section is a sea of blues, golds and greens and indiscernible faces. But when the marching band begins to play the Celtic Chant, two distinct groups are apparent: scatterings of men who hold their crossed arms aloft to form Xs, and the rest of the student body pumping its arms and screaming an expletive about the members of the former group: residents of Zahm House.

This image, which has become a customary part of the student experience at football games, is emblematic of Zahm’s broader relationship with the university: They often decide to stand apart.

Residents of the dorm have long embraced their reputation as campus renegades and leaned into their image as hard-partying outcasts. But, according to university officials, the dorm’s culture in recent years has metastasized into something beyond the pale.

When officials announced in March that Zahm would essentially close at the end of the semester, they offered little in the way of an explanation for the move, saying that the decision was driven by the dorm’s “troubling culture.”

But over the past two months, new details have emerged about the issues at Zahm that formed a backdrop for the university’s decision.

In recent months, university officials confirmed to Scholastic that some Zahm residents plotted to alter the results of their COVID-19 tests so they could attend a football game. The dorm has incurred thousands of dollars in repairs for acts of vandalism — both inside and outside Zahm. And an April report by The Observer contained a series of emails sent between Zahm residents in which some residents referred to their dormmates using racial slurs and joked about mental illness, sexual assault and gang rape.

Despite the dorm’s impending closure, some Zahm residents maintained that the culture in their hall was positive.

“Zahm’s culture is a culture of brotherly love, self-sacrifice for each other and community pride,” said Victor Kareh, a resident assistant.

Junior Adam Bisignani said, “ I would describe Zahm as a brotherhood.”

He declined to comment on the emails published in The Observer or whether they were a reflection of life inside Zahm.

Zahm has always had its own distinctive culture. When first established in 1937, the hall quickly gained a reputation for housing “the more ‘social’ students on campus,” according to the hall’s website. In the years since, the dorm has developed its share of Notre dame traditions, including Za, the dorm’s pizza parlor, the two-story “Here Come the Irish’’ banner which flies outside the dorm on football gamedays, and Ignants the Moose, a mounted moose head which serves as the dorm’s mascot.

Yet the Zahm we know today didn’t truly coalesce until March 29, 2007, when the Student Senate officially recognized the dorm as Zahm House. To commemorate the decision, Zahmbies dubbed the day “Zahm Independence Day,” and celebrate it annually with a water balloon battle.

Independence is an idea often associated with Zahm, and for Kareh, this conception is partly because of their tight brotherhood and because residents can feel ostracized by the greater Notre Dame community.

But according to Zahm’s rector, Rev. Bill Dailey, C.S.C, responses to this alienation play into Zahm’s negative reputation.

“Students here also speak of not liking being stigmatized,” he said, “but unfortunately they also lean into it, bond over it, and a negative feedback loop ensues — they feel treated differently and therefore entitled to behave differently and woe to anyone who suggests it should change.”

More Than Just A Reputation?

Associate Vice President for Residential Life, Heather Rakoczy Russell, described Zahm as having a “troubling culture” that perpetuated unacceptable behaviors such as “vandalism, disrespect for university officials, turnover of hall staff and disregard for COVID-19 protocols.”

“No single issue — reputational, conduct or COVID-19 — is the reason for this change, but taken together, the university no longer believes Zahm is equipped to welcome new students into a community,” Rakoczy Russell said, explaining the decision.

This is not the first time a residential hall has been transformed.

Rev. Thomas Blantz, C.S.C., who served briefly as the rector of Zahm from 1967 to 1970 before becoming the vice president of student affairs, spearheaded one of the largest transformations of Notre Dame’s residential community in 1971: when the university decided to admit women.

He had the unforgiving responsibility of selecting which men’s dorms would be converted into women’s dorms, and ultimately delivered the news to the men of Badin and Walsh himself when he had made the decision.

“An expression that Father Hesburgh used at the time — that I used on several occasions also — was, ‘You can’t make an omelette without breaking a few eggs,’” Blantz said, explaining that while he sympathized with the dissent expressed by the last male residents of Badin and Walsh, this was the nature of progress.

The university also cited the closure of Grace and Flanner halls in 1996 as an example of other residential communities undergoing similarly large transitions.

But to Bisignani, there are some significant differences to past transformations of residential halls.

“While we were given a mere six days to decide where we were to live next year, the residents of Grace and Flanner” were given more time. In those instances, Bisignani said, “Notre Dame at least gave students an opportunity to preserve their community in a new dorm and to maintain their friendships.”

But according to Dailey, Zahm’s conversion is based on “a culture that has to be disbanded.”

Junior J. J. Dyke, who transferred out of Zahm after his freshman year, described Zahm as having a party culture that revolved around alcohol. “At Zahm there weren’t any readily available other social opportunities,” he said.

He also explained that there was a visible transformation among many of the freshmen in Zahm, specifically in how they viewed women. “They’re decent at the beginning of the school year, and then have gone to a more objectifying view towards the end.”

Some members of the student body felt the dorm’s perceived culture surrounding women should’ve been a motivating factor in the decision to convert Zahm. Saint Mary’s junior Brigid Conmy wrote on Instagram: “Notre dame administration yet again not supporting victims by refusing to say that the ‘culture’ of zahm included r*pe culture. Stop protecting the reputation and protect us.”

The Observer obtained emails that were sent between roughly 200 residents of Zahm during the 2019-2020 year which contained graphic language and jokes about sexual assault directed towards both Zahm residents and the women of Saint Mary’s.

Yet Rakoczy Russell said “the decision about Zahm and the challenge of sexual assault on campus are separate matters.”

Records of on-campus sexual assault are not public, and the Notre Dame Police Department declined to comment for this piece.

Despite the widespread issues, those behind the decision made it clear that not all residents perpetuated the negative aspects of Zahm culture.

“In fact, some Zahm men have shared privately that they have been appalled by it but have felt powerless to change it,” Nathan Elliot said.

Elliot is one of three directors of residential life. Part of his job includes supervising a group of hall rectors, including Dailey.

Dailey himself noted that explaining the decision to close the dorm was difficult.

“There is a lot that is great in Zahm,” he said. “They are men who belong at Notre Dame and who often exemplify its best traditions of service and faith and friendship. They strive to be a very welcoming community from the moment first-year students arrive and they do develop tight bonds of friendship and loyalty.”

This loyalty and connection that Dailey described was echoed by both Kareh and Bisignani.

“I was planning and had applied to serve as an RA next year,” Bisignani said, explaining that he had “no idea” that the hall could be turned into a swing dorm.

Kareh said his experience at Notre Dame has been defined by the relationships and memories he formed within Zahm. “My freshman year, Zahm provided me with 200 brothers that looked out for me when I needed it most,” he said.

Dailey believed that this brotherhood should have allowed them “to preserve what they tell us they love” while stopping unacceptable behaviors. “But for being so tight-knit they don’t seem to be able to influence each other positively.”

Zahm had one of the highest rates of COVID-19 cases and instances of property damage among all dorms. Residence halls average around $500 per year in vandalism-associated repairs; repairs in Zahm cost $14,738 in 2019-2020.

“It’s hard to understand why one dorm needs a dramatic threat to do basic things like ‘don’t destroy the building, please’ or ‘wear masks and keep distance like every other dorm,’” Dailey said.

For Rakoczy Russell, Zahm’s “deliberate disregard” of COVID-19 regulations “was most apparent when some of them tried to alter results by cleaning their nostrils with rubbing alcohol just prior to the test and actually failing to swab their nostrils.”

The violation of COVID-19 regulations specifically concerned Dailey. The “low rate of compliance and a very high rate of infection” in Zahm made him feel “even more a prisoner of my room than the rules themselves required.”

The Future of Zahm

While the decision to convert Zahm to a swing dorm came as a “total and complete shock” to residents such as Bisignani, Rakoczy Russell said she has “no reason to believe that the Zahm decision is precedent-setting for any other current residence halls.”

Rakoczy Russell explained that the administration considered whether alternative options were feasible, but the issues in Zahm required immediate action.

“The seriousness of the most recent concerns — COVID-19 compliance and vandalism that impacted both the hall and university communities — together with the longstanding pattern of concerning behavior, precluded the possibility of simply offering a warning about Zahm’s status as a traditional residence hall.”

But the loss of Zahm as a full fledged member of the Notre Dame residential community may not be permanent.

Though administration anticipates “Zahm will serve as a swing hall for the foreseeable future,” according to Rakoczy Russell, she added that they “expect that Zahm will return to a traditional hall again one day after the completion of its own major renovation.”

While Rakoczy Russell said it would not be “prudent to speculate about the timeline” of a reinstatement, she added that the university is “confident that the pause will be sufficient that when Zahm reopens as a traditional residence hall it will not continue the patterns we have been discussing recently.”