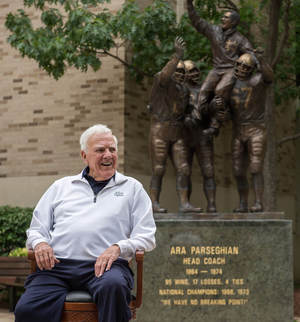 The Notre Dame community lost a legend in the early hours of Wednesday, Aug. 2, when two-time national champion and College Football Hall of Fame coach Ara Parseghian passed away at the age of 94.

“Notre Dame mourns the loss of a legendary football coach, a beloved member of the Notre Dame family and good man — Ara Parseghian,” Notre Dame president Rev. John I. Jenkins, C.S.C. said in a statement issued by the university. “Among his many accomplishments, we will remember him above all as a teacher, leader and mentor who brought out the very best in his players, on and off the field.”

Brought in to revive a Fighting Irish football program which had won more than five games only once in the previous six seasons, Parseghian never won fewer than seven games in any of his 11 years at the helm in South Bend.

“Winning — that’s how he changed things [at Notre Dame],” Valdiserri said. “He came here after the previous season[’s record] was 2-9, and in the first year he [came] within two or three minutes of winning a national championship.”

Recalling Parseghian’s transformation of quarterback John Huarte, class of ’65, from benchwarmer to Heisman Trophy winner in 1964, Valdiserri continued, “That was his greatest attribute. Once he saw [players’] talents — and he was a phenomenal evaluator of talent — he could place people in the right spots. He took people who were riding the bench or second-string and made them All-Americans.”

Born May 21, 1923 in Akron, Ohio, Parseghian graduated from Akron South High School in 1942 and enrolled at the University of Akron. He withdrew shortly thereafter, however, to serve in the U.S. Navy during World War II. After completing his service time, Parseghian enrolled at Miami (OH) University where he played football, basketball and baseball. He was drafted twice to play football — in the 13th round of the 1947 NFL Draft by the Pittsburgh Steelers and in the 25th round of the 1948 All-American Football Conference (AAFC) Draft by the Cleveland Browns. He decided to accept the latter selection, reuniting with Hall of Fame head coach Paul Brown, who was the head coach of the Great Lakes Naval Academy football team when Parseghian was serving, and would play halfback for Cleveland as the Browns won back-to-back AAFC championships.

Because a hip injury in the second game of Parseghian’s second season with the Browns kept him from sustaining a playing career, he decided to try his hand at coaching. Parseghian began his career on the sidelines at his alma mater, Miami University, where he served as an assistant coach for two seasons before a promotion to head coach in 1951. His 39-6-1 record in five years as head coach of the Redskins (now RedHawks) featured two MidAmerican Conference (MAC) championships and two wins over Big Ten opponents, including Northwestern.

After the 1955 season, Parseghian left Miami to coach Northwestern, where he would compile a 36-35-1 record over eight seasons. Only the current Wildcats coach, Pat Fitzgerald (77-62 in 12 seasons), has posted a winning record since Parseghian’s departure. 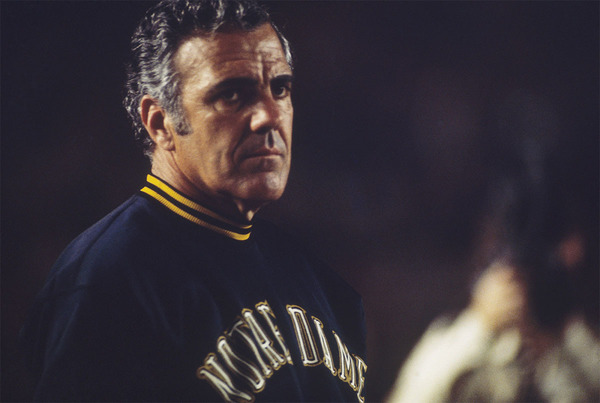 In “God, Country, Notre Dame,” the autobiography written by the late Rev. Theodore M. Hesburgh, C.S.C., the former university president recalled the adventure of attempting to bring Parseghian to Notre Dame after he had announced his departure from Northwestern.

“Ara called Father Joyce, whom he knew well … [and] told [him] that he had decided to leave Northwestern and was considering several offers,” Hesburgh wrote. “Would Notre Dame be interested in him? Would we!”

“Parseghian had agreed to meet us on neutral ground, which turned out to be a Chicago motel at 9:30 at night,” Hesburgh continued. “I won’t soon forget that night. Ned and I drove some 80 miles in a blinding snowstorm to keep that appointment. And it was worth it.”

When Parseghian arrived at Notre Dame from Northwestern, the Irish were in the midst of a four-game losing streak against their nearby rivals from Evanston. On Oct. 2, 1965, Parseghian’s first time coaching against his former team, the Irish won 38-7, the first in a string of 14 consecutive Notre Dame wins over Northwestern. The Irish would not drop another game to the Wildcats until a 17-15 loss in September 1995.

Valdiserri, a friend of Parseghian for over 50 years after the latter’s arrival to Notre Dame, recalled with joy the many memories shared between the pair and the many qualities — on and off the field — for which Parseghian was so highly regarded.

“As a man and as a person, he was the most disciplined and honest person I’ve ever met,” Valdiserri said. “He was the epitome of everything gentlemanly that you could think of or want in a leader. He could’ve led any group into battle on the football field, and he was a person that you could easily admire.”

Parseghian set a high bar in his first year in South Bend, and he never looked back. His 1963 team went 9-1, reaching the top spot in the Associated Press Top 25 before finishing the season ranked third. He led the Irish to undefeated seasons in 1966 and 1973 to secure two national championships, breaking a 17-season drought. 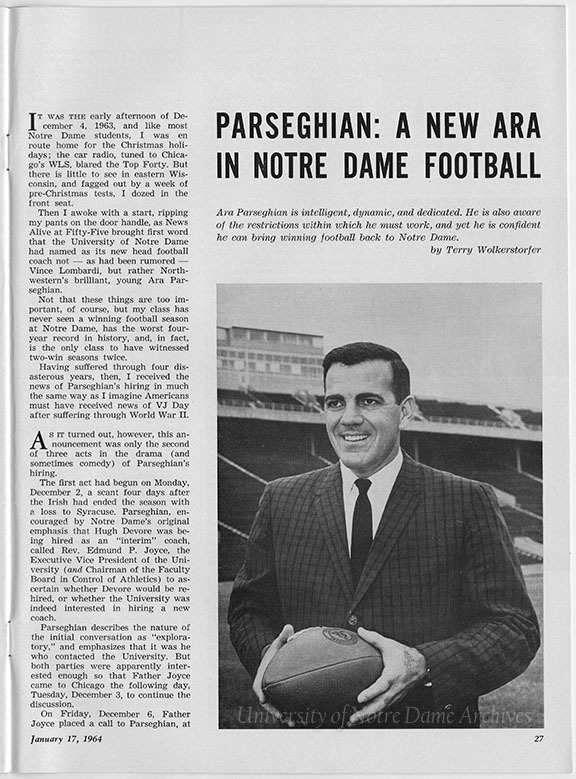 “There was no question who was in command, who was the leader,” Brian Boulac told WNDU shortly after Parseghian’s passing. Boulac was a graduate assistant for Parseghian’s first national championship in 1966 and an offensive line coach and recruiting coordinator for his second in 1973. “But there wasn’t anybody that was too small on his team that he wouldn’t take time out to listen to them. I think that engaging personality, his ability to listen to whatever problems you had and to help sort it out--players or whomever.”

Boulac continued, “I put him in that category with Father Hesburgh as two giants in our field.”

Parseghian finished with a 95-17 record in 11 seasons (1964-74) as head coach of the Fighting Irish. The team finished in the top 10 of the final AP poll, with 40 Irish players named First-Team All-Americans during that span. Quarterback John Huarte won the Heisman Trophy in 1964.

Parseghian sits near the top of the Irish record books in a number of categories, including regular-season wins (third- 95) and win percentage (fourth- .836), with his three bowl wins placing him in a tie for second behind Holtz’s five. Parseghian is also third among all Irish coaches with a 6.8 win:loss ratio, trailing only Rockne (8.75) and Holtz (7.91). Rev. Edward A. Malloy, C.S.C., who succeeded Hesburgh as president of Notre Dame, awarded Parseghian with an honorary degree from the university at the 1997 Commencement Ceremony.

“I was so delighted that we could recognize him [with an honorary degree], not only for his legendary status as a coach but also because he has spent a lot of time fighting Niemann-Pick disease,” said Malloy.

In 1994, Parseghian, along with his son Michael and daughter-in-law Cindy, started the Ara Parseghian Medical Research Foundation to fund research of Niemann-Pick Type C Disease (NPC) in an attempt to discover a cure. NPC, a genetic pediatric neurodegenerative disorder usually found in school-age children, gradually deteriorates the nervous system to the point of fatal neurological problems. NPC has since taken the lives of three of Parseghian’s grandchildren — Michael and Cindy’s children — Michael, Marcia and Christa. The foundation has raised over $45 million since its inception.

Continuing a partnership between Notre Dame and the foundation in 2010, the university established the Ara Parseghian Medical Research Fund in May 2016 and relocated the administrative functions and granting process of the foundation from Tucson, Arizona, to Notre Dame.

“When I first started out, I wanted a silver bullet,” Parseghian told the South Bend Tribune in 2016. “I wanted that cure that could help the children immediately. But research doesn’t work that way. You’ve got to go step by step by step.

“But the money that we’ve been able to raise and funnel into research has been very beneficial. We know a lot about it. When we first started, we knew very little about Niemann-Pick. We didn’t even have a diagnostic test to tell it was Niemann-Pick, so we’ve come a long way. It was a paragraph or two in the med books. We’ve brought a lot of information about the disease out to the public and the people who have the misfortune of having their children diagnosed with this.”

Parseghian, a leader of men on the field and a pioneer for children’s health away from it, will be remembered as a hero of Notre Dame who epitomized the desire to be successful in all components of life.

“Ara Parseghian … combined the best qualities of all the great Notre Dame football coaches,” Malloy later wrote in his own autobiography. “He was great at adapting his strategy to the talents of his athletes, he was a master strategist in preparing for games and an excellent recruiter, and he represented the best of Notre Dame.”

He is survived by Katie, his wife, two children — Kristan Parseghian Humbert and her husband, James Humbert; Michael Parseghian, the secretary/treasurer of the research foundation and member of the university’s College of Science Advisory Council, and his wife, Cindy, president of the foundation and a Notre Dame Trustee; son-in-law James Burke and six grandchildren.

When asked how to describe Parseghian’s life, legacy, and their halfcentury-long friendship, Valdiserri veered away momentarily from the seemingly expected answer of “disciplined” or “leader.”

“My one word for him would be ‘admiration,’” Valdiserri said after a noticeable pause to consider his next words. “Because of the things that we talked about — the self-discipline, the honesty, the principle — he was everything that I would like to be.” 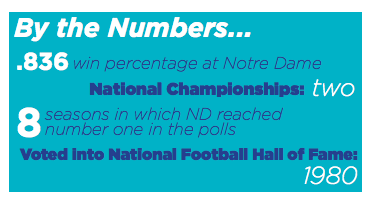