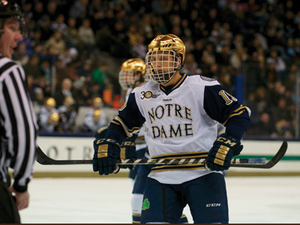 Midway through this season, Head Coach Jeff Jackson’s team has started off 8-4-4, with two of those losses coming from No. 8 Harvard and No. 5 Massachusetts Lowell. This performance has earned the Irish a No. 20 ranking in the country.

The Irish’s performance since last season’s difficult stretch can largely be attributed to the leadership and solid play from the team’s current seniors. Jackson assigned the entire senior class to leadership roles entering this season. “We just decided that this class has been so good over the last three years; I just named the entire class,” Jackson told UND.com.

The class includes center Steven Fogarty, who was named captain for a second consecutive season (the first time for an Irish player since 2007), along with alternate captains center Thomas DiPauli, left wings Sam Herr and Mario Lucia, and defenseman Andy Ryan. Fogarty, DiPauli and Lucia have 10, 13 and nine points respectively thus far this season. Herr and Ryan have been credited with 10 and 17 blocked shots each.

The team’s upcoming schedule includes matchups in December against No. 2 Boston College and in January against No. 9 Denver. This stretch will prove to be a tough test for the Irish, but senior defenseman Ryan believes the squad’s senior leadership will contribute to success on the ice.

“I think it’s the ability to hold other guys accountable, on and off the ice,” Ryan told UND.com. “That’s really something we’ve been focusing on as leaders. That’s going to take us far, if we can do that. It can’t just be the coaches trying to get guys to do stuff. It’s worth more if it comes from us.”