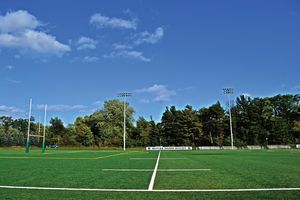 This year, RecSports quietly moved from the Athletics Department, its home since formation, to the Division of Student Affairs. RecSports, which governs student recreational facilities as well as club and intramural sports, is no longer a part of the juggernaut that is Notre Dame athletics.

RecSports joins a university division which, according to its website, “exists to serve and to enhance student life.” Other departments within Student Affairs include the Career Center, Campus Ministry, University Health Services and the Office of Community Standards.

Jennie Phillips, RecSports Assistant Director of Fitness and Fitness Facilities, says the change was likely spurred by the imminent Campus Crossroads project. The building to be added on the West side of Notre Dame Stadium, Phillips says, will house a brand new recreation center along with “a lot of student activities oriented offices and the new Career Center.” In anticipation of these shared facilities, she says, “it made sense for RecSports to become part of the bigger group that is Student Affairs.”

“The new categorization and future proximity will be a great opportunity for [RecSports] to do a lot more comprehensive cross-programming between offices within Student Affairs, whether it’s between student activities (SAO), the Gender Relations Center or the Office of Alcohol and Drug Education,” Phillips says.

Few other universities’ athletic departments harbor their divisions of recreational sports. The Campus Crossroads project “plans to bring academics, athletics, and student life together,” according to the project’s website. But even as new facilities for students are added to the stadium, the general student body is being distanced from the athletic department.

Currently, none of the other departments in the Division deal primarily with athletics, but SAO charters club sports and the Club Coordination Council helps fund them.

RecSports, however, governs a number of club teams that function in similar ways to a varsity sport and compete at a high level of play. The rugby and men’s rowing clubs, for instance, are the university’s highest-level club teams; they may present unique challenges to a division more familiar with clubs that operate largely within the university.

The changeover has gone relatively smoothly thus far — so much so that it has gone largely unnoticed by the ND community. It remains to be seen whether severing ties with the athletics department will limit funding or future opportunities for RecSports.

Philips is confident that Student Affairs is the right place for RecSports. “They’re so passionate about making sure students have an incredible experience while they’re here — and RecSports is very engrained in students’ lives,” she says.

Phillips also thinks Student Affairs may be able to improve from the acquisition of RecSports. “[The partnership] may provide both groups with opportunities to add a different spin to some programming, which could be really beneficial for everyone,” Phillips says.